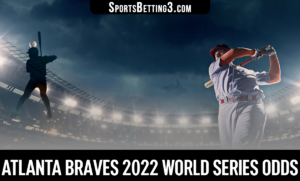 With the 2022 Major League Baseball season set for Thursday it is never too early for World Series odds. Here at sportsbetting3.com, we look at the different teams, break down the key players, division and give our final thoughts.

This article will cover the Atlanta Braves.

Freddie Freeman not being in a Braves uniform is surreal. As the day loomed over Atlanta’s head it quickly worked a deal for Matt Olson by giving up four of its’ top prospects.

Other additions made were the signings of Collin McHugh, Kenley Jansen and Kirby Yates. All moves that bolster the bullpen for the Bravos.

Atlanta lost a few key players as well, like Jorge Soler, Joc Pederson, and Chris Martin in the offseason. All of whom played a vital role in the Braves championship season.

The players recovering from injuries are huge for Atlanta. Ronald Acuna Jr. posted incredible numbers in the first half of the 2021 season, as he hit. 283 with 24 home runs and 52 RBIs. He then suffered a torn ACL and missed the rest of the season.

Kirby Yates remains on the injured list as he recovers from Tommy John surgery. If he is able to play this year he gives the Braves another solid arm that can either close games or hold a lead in the latter half of games.

Perhaps the biggest question mark for Atlanta is Mike Soroka. The 24-year-old tore his ACL in August 2022 and has not pitched since.  Before the 2021 season, he tore his ACL again that required another surgery to repair. Soroka was dominant and looked like a top-10 pitcher in the making, now he may never reach that level of success again.

In 2021, the Braves finished the season 45-31 against the NL East, and a big part of the success was being able to own the division rivals. With a second-half surge in the season, Atlanta charged in the playoffs by climbing up the division. At the All-Star break, the Braves posted a 44-45 record, and looked out of contention before August. A plethora of moves revitalized the team, and Atlanta went 44-28 in the second half.

According to BetRivers, Atlanta has the best odds of winning a World Series with +1100, but this division possesses talented pitching across the five teams. For the National League Pennant odds, Atlanta ranks second with +500.

In both of these odds, Atlanta is a marginal favorite from the next NL East team. The success for 2022 may not be as dramatic, but it is not farfetched to think Atlanta is bound for the playoffs in the upcoming season.

It is hard to bet against the defending World Series Champions to not win the NL East division.

The bigger problem is when the Braves get to the playoffs can it still compete with the tougher teams. The Los Angeles Dodgers and St. Louis Cardinals are two teams that gave the Braves problems in the playoffs before.

With the new look of Atlanta, this team on paper can still compete and be relevant, but that is why games are not played on paper.

In the 2022 season, Atlanta will be a team to watch as the franchise vies for another World Series trophy.

Whether it is Opening Day or the World Series, here at sportsbetting3.com we help bettors make informed decisions to win extra money on baseball and all sports!