** Important Update **
The following conferences have postponed or cancelled their 2020 football season.

Second, research each teams’ record against the spread (ATS). See this website. Check how often Alabama covers as a favorite. Review LSU’s performance as an underdog. Suppose LSU has a winning ATS record.

Third, check the line. Suppose it just moved to Alabama -7. This change suggests heavy action on the favorite. Alabama must now win by 8 or more points. A 7 point win ties the spread. Latest NCAAFB odds here.

Combine the results of your handicapping research:

Taking underdog LSU represents much better value than following the public. It’s likely many bettors picked Alabama without taking a hard look at the numbers.

SportsInsights.com compiled the following data from the 2015-16 college football season. The overall win rate is higher when betting against the public in big games.

College Football Betting Against the Spread

Analyze college football ATS trends to guide your betting strategy. Note how favorites vs. underdogs perform against the spread. Review similar data for home vs. away teams.

Dig deeper. Assess how home teams perform as favorites vs. underdogs. Do the same for away teams. Many valuable trends will develop over the course of a season. Use this link to see current and historical College Football ATS trends.

You can identify good total betting opportunities from a sportsbook’s spread and total numbers. See our calculation here. You have an edge if total isn’t consistent with the calculation.

The following are the most common college football prop bets.

Odds to Win the Heisman Trophy

This prop is a bet on this season’s future Heisman Trophy winner. Sportsbooks will offer odds for 20+ players. The 3-player list above is just an example.

Note each player’s odds. Minus numbers indicate a heavy favorite. Bettors must risk the ML value in dollars to make $100.

Plus numbers indicate less likely underdogs. A list with all plus numbers suggests no obvious favorite. Bettors must risk $100 to win the ML value.

Other individual player props work the same way. Make regular visits to your sportsbook’s props page. Prop bet lines and odds will update throughout the season.

Tip
Taking the most likely team isn’t necessarily an obvious winner. The least likely team could be a better value. Always research scoring trends of each team.

This future is a bet on a team’s probability of winning the National Championship. Bettors may choose 2 or more teams to manage risk.

Tip
Research your team as much as possible before betting. Bet immediately before the prop closes. Taking this bet too early is risking. Never bet with incomplete information.

This bet is a prop and future hybrid. Season win totals will have one negative and one positive value. These numbers assign odds to results above or a below a win total line.

This win total line includes ½ points. That means no tie bets are possible.

Handicap each team’s schedule. A historically strong team with an easy schedule suggests a winning final record. If you think they’ll win more games than the sportsbook’s line, bet over.

Tip
Place small bets. Your money will be tied up until the wager can be graded. This commonly happens at the end of the season. Or, when the team can no longer win enough games to exceed the win line. Then the under wins. 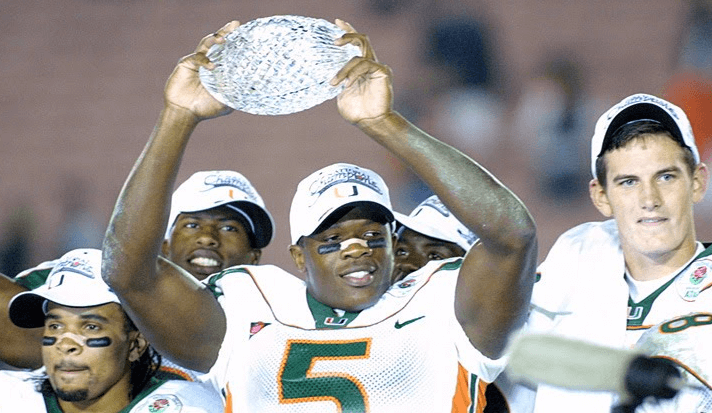 Miami cruised to the 2001 National Championship with a perfect 12-0 record. The Hurricanes crushed their opponents winning by an average of 32.9 points.

17 players were first round NFL draft picks. That includes wide receiver Andre Johnson who was the BCS Championship co-MVP with quarterback Ken Dorsey.

Johnson later enjoyed a 14 year career in the NFL, mostly spent on the Houston Texans.
Dorsey returned as a senior to lead Miami to the 2002 BCS Championship where they eventually lost to Ohio State in double overtime. In 2003 he was drafted in the seventh round to the San Francisco 49ers. 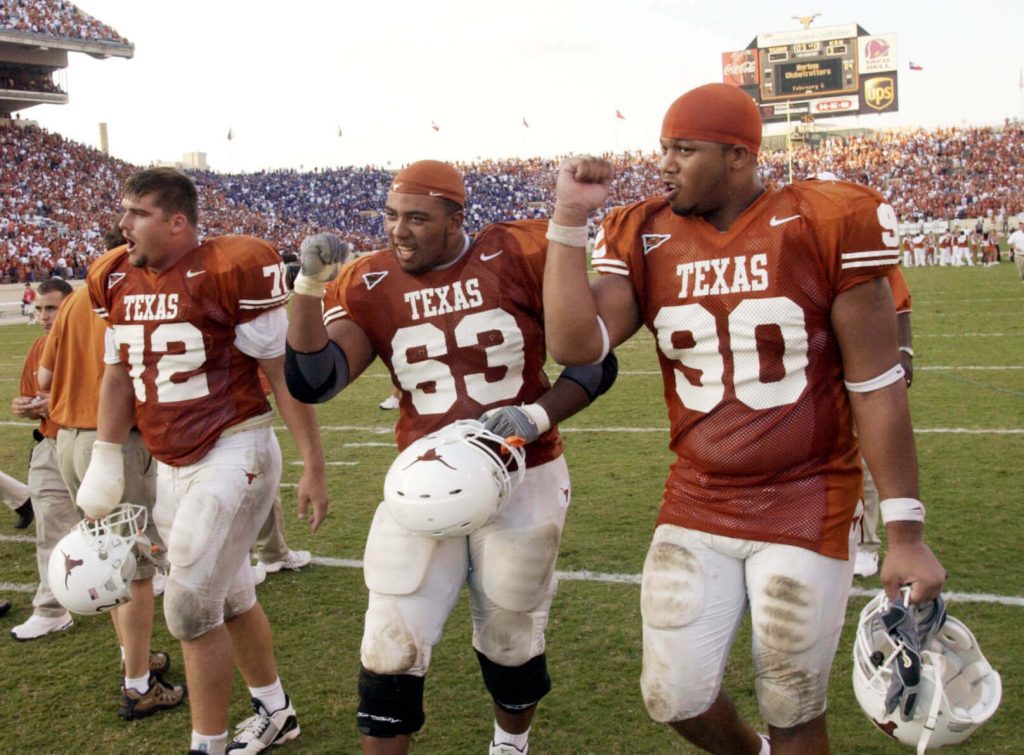 Texas eked out a 41-38 2005 BCS Championship win against defending National Champions Southern California. The Longhorns’ dramatic victory was the perfect topper to a 13-0 undefeated season.

Quarterback Vince Young powered the team’s offense all season. He was the first college quarterback to pass for 2,500 yards and rush for 1,000 in the same season.

Young, cornerback Aaron Ross and safeties Michael Griffin and Michael Huff went on the NFL. Vince Young played with the Tennessee Titans from 2006-2010, then with the Philadelphia Eagles for 2011. He retired in 2014. 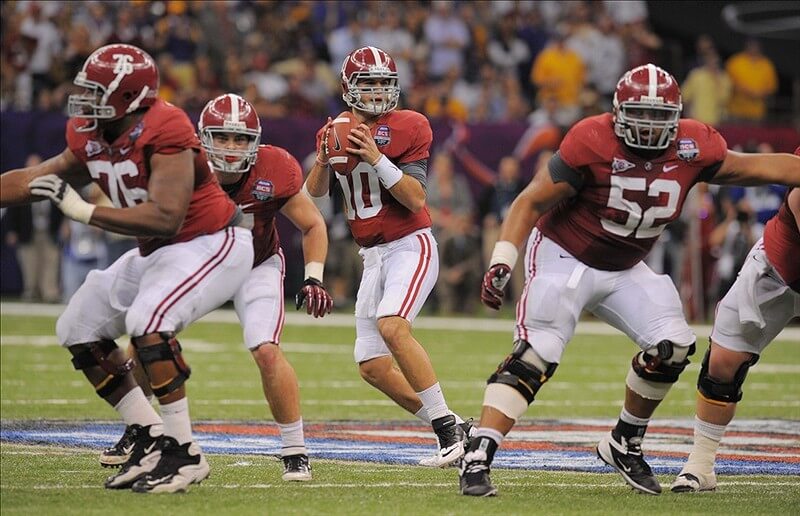 Alabama’s 21-0 National Championship victory against LSU is the only shutout in BCS history. It was sweet revenge for Coach Nick Saban after the Crimson Tide finished second to the Tigers in the SEC.

Alabama’s defensive prowess goes without mention. It allowed just 8.2 points per game. Only one other team scored more than 14 points against them all season. This helped the 2011 Crimson Tide win most games comfortably, including a 42-14 romp over Auburn.

Tailback Trent Richardson was a first round NFL draft pick. He was joined by 3 teammates from Alabama’s formidable defense: Mark Barron, Dre Kirkpatrick and Dont’a Hightower.

Believe it or not, Florida State wasn’t ranked in the top 10 when the 2013-14 season began. Minds changed after the Seminoles started crushing seemingly better competition.

Winston also won the 2013 Heisman Trophy. He joined the Tampa Bay Buccaneers in 2015 as the #1 overall draft pick. Any other choice would have been a gross oversight after his stellar performance with the Seminoles.

Auburn didn’t exactly steamroll its opponents. In fact, the Tigers won 6 games by a touchdown or less. They made the 2011 National Championship facing the Oregon Ducks. The game was tied 19-19 with just over 2 minutes left. A favorable call secured a 37 yard gain for Auburn, setting up the eventual winning field goal.

Quarterback Cam Newton went on to win the Heisman Trophy. He was drafted #1 overall by the Carolina Panthers. He later took Carolina to the Super Bowl earning an MVP in the process.

Auburn faded somewhat after Newton’s departure. The Tigers remain a strong perennial SEC contender but have yet to make another National Championship. This is understandable given the long shadow Alabama casts from Tuscaloosa.

We’ve analyzed AP (Associated Press) Preseason college football rankings from 1998 to present. The goal was to determine if these rankings can predict the eventual National Champion.

The following insights will be helpful for National Championship futures bettors. Payouts are usually higher before a season begins because sportsbooks don’t have enough data to handicap each team. Strong teams losing the first 1-2 games will also get underdog status until they start winning again.

14.29% of preseason teams ranked #1 eventually won the National Championship. Choosing the #1 team is a bad bet. It’s only happened 3 times since 1998!

But 52.38% of teams ranked #3 or #4 or higher did win. That’s a coin flip. Still a risky bet by some measures.
A better bet? 65% of preseason teams ranked 5 or higher went on to win. Now probability is on the future bettor’s side.

Let’s dig into each rank’s performance. Some ranks perform better than others. Eliminating poor performers potentially decreases the cost of our future bet.

Notice #2 teams win more than double the times a #1 wins. Bad news for any #1 and good news for this season’s #2. Interestingly #5 teams have won as much as #1 teams.

Does that mean the #4 team should be removed from our 5 team futures bet? It’s not a bad idea. You’ll save money paying only for 4 teams. Check each team’s historical performance before marching off to your bookie:

Clemson has the best record of all top 5 teams since 1998, winning the National Championship 66.67% of the time. Keep a top 5 Clemson team in your futures bet!

Alabama and Miami (FL) have won 45% and 25% of the time respectively. Florida and LSU have each won once in their 6 top 5 preseason rankings appearances. These teams are less reliable.

The AP ranked the Oklahoma Sooners 10 times in the preseason top 5 since 1998. Each time they failed to win the National Championship. Michigan and Oregon both appeared 4 times and never won, either. Georgia, Tennessee and Nebraska each failed 3 times. Nebraska last won in 1997. Tennessee won in 1998 ranked #10 in the preseason.

What does this mean for the 2019-20 National Championship? Which teams are investment-grade contenders?
The following table summarizes our conclusions using the statistical trends identified above.

1. Clemson, Alabama, Georgia & Ohio State – Drop unlucky #4 Oklahoma. The Sooners have only been ranked top 5 once and have never won the National Championship when ranked top 5 in the preseason since 1998.

2. Clemson, Alabama & Ohio State – Drop Georgia and Oklahoma. See above #1 why Oklahoma isn’t worth a bet. Georgia hasn’t won a championship despite 3 preseason top 5 appearances since 1998. Also, only 4.76% of teams ranked #3 have won a title.

3. Clemson & Alabama – 47.62% of teams ranked 2 or higher have won the National Championship since 1998. Clemson and Alabama have the best historical records of top 5 teams. Buyer beware: odds are less than a coin flip.

Is this bet worth it?

Is the expected value of these bets positive? Not based on historical trends.

A 4-teamer with a 65% probability is still risky (#1). Remember, you must divide your wager among 4 teams such that you make a profit if any of them wins. Try playing with this arbitrage calculator. You’ll get a rough idea about how much to bet on each team.

Don’t use arbitrage unless you cover all possibilities

Caution: Arbitrage assumes a fixed number of possibilities. In this case, there are more than 4 teams that could win. These 4 are only the most probable. There’s a 35% chance any other team wins. That means you would lose your entire investment.

If one of the 4 wins, you’ll make a small percentage gain. But if none win you’ll lose 100% of your investment. Futures bets are generally risky unless you can find arbitrage opportunities among small sets of teams, like NFL division futures. Read more here.