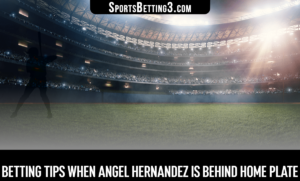 Baseball is a game of inches where one play determines cashing out big or not at all.

Umpires affect the outcome of a game as well.

Angel Hernandez is one of the most well-known umpires in the league. Regarded as one of the worst, the ump makes terrible calls that dramatically affect games often.

According to the Umpire Score Cards website, Hernandez is 91.9% accurate and 92.5% consistent. He leverages 0.13 runs of impact per call. Alarmingly, the notorious umpire averages 0.5 runs of favor per game. This means that Hernandez sways the game by 0.5 runs, which in betting is crucial to spreads and teams covering them.

So, let’s talk about betting tips for when Angel Hernandez is the home-plate umpire by examining the five games he’s umpired in 2022 so far.

The opening game for Hernandez was an 11-2 game where the Washington Nationals defeated the Atlanta Braves on the road. In a game this lopsided the favor of 0.63 to Atlanta and a total run impact of 1.91 seem minuscule.

The Detroit Tigers beat the Kansas City Royals 2-1 in Kaufman Stadium. Hernandez displayed an abysmal 88.8% accuracy. A favor of 0.3 to the Royals and a run impact of 0.98. In a close game like this, Hernandez impacts the game dramatically, so bettors need to note games like this when he is behind the plate.

The Toronto Blue Jays thrashed the Boston Red Sox at Fenway Stadium 6-1. Hernandez’s accuracy and consistency of 96.9 resulted in his best game of the season so far. He totaled a 0.48 favor to Toronto and a total run impact of the same score. Again, in games like this the favor is not as dramatic, but almost a half-run favor is crucial to bets in close games.

This game is the most recent debacle in the Angel Hernandez saga. The infamous 3-2 ball that was called a strike on Kyle Schwarber, which resulted in his ejection. In this 1-0 win for Milwaukee, Hernandez created a 0.77 favor the Brewers. The called strike accuracy of 77%, affected the Phillies, particularly in the late stages of the game. An estimated 11 of 48 called strikes were true balls, and five of the 81 called balls were actually strikes.

With these games in mind, bettors must account for a 0.5 run total, whether it is for the home team or not. While three of the five contests Hernandez called favored the home team, these should not be steadfast numbers bettors cling to. Rather, these run totals should be closely examined and add 0.5 to it, or tallied into a spread.