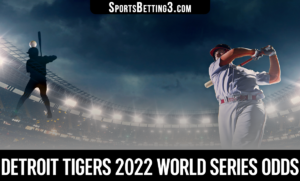 With the arrival of spring it usually signals the start of the MLB season, but with the lockout, it will be longer than fans wanted.

Nonetheless here at SportsBetting3.com, it is always a good time to discuss odds and go over what a team’s chances are to win the World Series. For this piece, the team is the Detroit Tigers with a breakdown of key additions, division and overall thoughts.

The Tigers added two big names from free agency that improve their  World Series odds, shortstop Javier Baez and left-handed pitcher Eduardo Rodriguez. Detroit’s odds went from a 75-to-1 chance to a 33-to-1 chance. A significant improvement for a team last made the playoffs in 2014. This brought the Motor City to 16th of 30 teams for odds to win the coveted trophy.

Baez spent the 2021 season with the Cubs and Mets. He hit a modest .265 with 31 homers and 87 RBIs. Compared to the ’21 Tigers, Baez’s average would be the fourth best, the most round trippers and the most RBIs. His 4.5 wins above replacement (WAR) is solid, but for Detroit he’d be the highest in that category too. Baez defense netted him a Gold Glove Award in 2020, so he is a capable fielder as well. A glaring problem for Baez is the strikeouts where he finished the 2021 season with a 33.6% strikeout percentage and in his eight-year career his average is 29.3%.

Rodriguez comes off a ’21 season where he allowed a 4.74 earned run average (ERA) en route to a 13-8 record with a walk and hits per inning (WHIP) of 1.39. It is no secret, Rodriguez struggled, but if he can reclaim the dominance he possessed in 2018 and ’19 where he combined for a record of 32-11, then he can anchor a young pitching staff that is largely highly touted prospects.

While the additions make the Tigers more fierce, it does not automatically make them the favorites in the AL Central, as noted in the odds.

Rest of the division

Speaking of the AL Central, with the exception of the Chicago White Sox that won the division, every other team finished under .500. The Tigers could easily shoot up to a contender in their division as their 77-85 record in ’21 placed them in third and 16 games out of first place.

It is plausible that the additions of Baez and Rodriguez help close the gap. But what will be a huge help for the Tigers is the development of their pitching. Names like Matt Manning, Casey Mize and Tarik Skubal are integral pieces to the Tigers future and a promising rotation. Also, outfield prospect Riley Greene and infielder Spencer Torkelson are worth keeping an eye on as they may head to the big leagues in 2022.

If the pieces all come together for Detroit in their young talent, it is easy to see them giving the White Sox a fight for the  AL Central pennant.

While the additions are nice, Baez and Rodriguez are not enough.

The pitching prospects show promise, but the odds of all three turning a corner at the same time are low. Not that Manning, Mize and Skubal do not show the ability, but it won’t topple Chicago.

Preface this with a big if, if the young talent shines through, then there’s a chance Detroit gets in the postseason. But they will be lucky to get far in the playoffs if they make it.

Detroit has too much competition ahead of them and not enough talent to be a top contender yet.

With every sport there are multiple ways to make money let us at SportsBetting3.com help you get in the green!