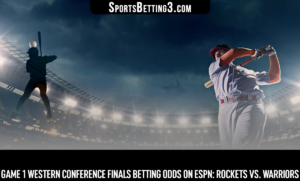 The Houston Rockets and Golden State Warriors get set for battle when the two teams meet in Game 1 of the Western Conference finals on Tuesday night at the Oracle Arena.

The winner of this best-of-seven series will earn the right to advance to the NBA Finals, while the loser will begin its offseason.

Oddsmakers like the home team in this one, putting a spread of -10 on Golden State, while setting the total number at 220 points (OVER -115). Money line supporters of the Rockets can grab +425 on the NBA odds board.

For the Warriors, this conference finals appearance is the team’s first since 1976. They swept the Pelicans in the opening round and drew a tougher opponent the following round in the Memphis Grizzlies, but beat them in six games to reach this point.

Houston reaches the conference finals for the fist time since 1997, but had a much harder time getting here than the Warriors. They made quick work of their opponent, the Dallas Mavericks in round 1 – beating them in five games, but then went on to face the Clippers and fell behind 3-1 in round 2 before rallying to take the next three games to win the series 4-3 – ultimately advancing to the conference finals.

Now, let’s take an inside look at some of the more relevant numbers for this game.

In head to head play, the Rockets have failed to cover the last five games (0-5 ATS) against the Warriors and they are just 2-5 ATS in their last seven games played on the road. The OVER is 18-8-1 in the last 27 meetings between these teams when the game is played at Oracle Arena.

Game 2 is scheduled to be played at the same spot on Thursday in Oakland.