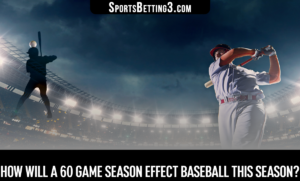 The first major sport to return from  Covid-19 will be Major League Baseball in July. The return of baseball means that normalcy is finally rearing its head in the United States. This breath of fresh air will give fans sports and a baseball season that will be completed by October 28th. Baseball officially has released odds for who will win this very odd 60 game season.

This is extremely important to understand as injuries should play less of a factor than usual. We will look to take advantage of the shortened season by reviewing odds for the World Series and American and National League Winners. Keep in mind, the shortened season has introduced the Designated Hitter to the National League for the first time. Lastly, all odds are consensus-listed odds.

The Dodgers are being labeled as one of the greatest teams put on a baseball field after their acquisition of Mookie Betts. They do lose David Price who opted out of the season and Hyun-Jin Ryu left to free agency. That is where their losses end as the Dodgers have a loaded farm system ready to step up when needed. +400 seems reasonable given the fact that they won 107 games last season and brought in a top 3 player in baseball last season. That on top of Cody Bellinger who already won the NL MVP award last season, the Dodgers are built to win the world series this season. Sharing top odds with the Yankees this season who are also +400, is generous. The Yankees did not add the same amount of firepower that the Dodgers did and the Dodgers won more games in 2019.

These odds are phenomenal thanks to the star power that their roster consists of. Furthermore, Austin Riley will slide right into their DH spot, lengthening their lineup. There is a slew of young talent ready to make an impact as well, Pitcher Kyle Wright and Outfielder Cristian Pache are all set to be apart of the big league roster. Marcell Ozuna signed a 1-year deal in 2020 and will be a welcomed addition. The Braves are one of the most talented teams in baseball and should be the favorite to win the East. Expect the Braves to win the division title and face head-on with the Dodgers.

One of the most creative teams in baseball, the Tampa Bay Rays feature one of the best rotations in all of baseball. The combination of Charlie Morton, Tyler Glasnow, and Blake Snell bodes extremely well for the AL East contenders. While the Yankees will assuredly contend for the division, the Rays have the pitching and creativity to navigate through a 60 game season. With the game about to fall into chaos, the Rays will not be scared to use starters in all capacities when needed. They won 96 games last season with a season-ending injury to Glasnow. He is expected back healthy and they clearly very high on Hunter Renfroe after his trade for Tommy Pham. Finally, this might be the year that the Rays steal the division from the Yankees.

The reigning American League Manager of the Year, Rocco Baldelli led his team to the most home runs in baseball in 2019. Josh Donaldson switches from Atlanta to Minnesota to create a scary lineup. Anchored by Miguel Sano and Nelson Cruz, the Twins will rely heavily on Byron Buxton to have a healthy season. He is an important cog to their lineup Should he round into shape. The Twins should easily win the American League Central and compete in the playoffs, if a few things break their way the American League title becomes very viable.

Already mentioned in the World Series section, the Atlanta Braves are a whopping +800 to win the Pennant. The World Series odds seemed ridiculous and so do the National League ones. The Braves are one of the most talented teams in all of baseball. If it weren’t for the Dodgers super-team, every expert would be on the Atlanta bandwagon. With dark-horse Cy Young Candidate Mike Soroka ready to take the step forward, the Braves are very strongly valued to take National League honors.

One of the youngest teams in baseball, the San Diego Padres feature Manny Machado, Fernando Tatis Jr., and Eric Hosmer in their infield. These infield stars to go along with Outfielder Tommy Pham and Closer Kirby Yates gives the Padres plenty of young talent. Chris Paddock will take a step forward after a very strong rookie season. This might be a year too soon for San Diego to contend but the roster’s talent is unmistakable. If they do not compete deep into the playoffs this year, they should be prepared to do so in the future.