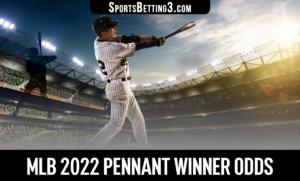 With opening day scheduled for April 7, bettors shift their focus to the MLB for their sports fix. Here at sportsbetting3.com, we look at who are the favorite teams for the AL and NL Pennants. All odds are courtesy of BetRivers.

No surprises here as the Dodgers are perennial favorites for the  NL pennant every year.

Oh, and they got first basemen Freddie Freeman too.

With an All-Star at every position, and a talented pitching staff led by Walker Buehler, the Dodgers are clear favorites.

But there are some uncertainties in LA like Trevor Bauer and Dustin May for the 2022 season. Despite facing no criminal charges, Bauer is being investigated by MLB for sexual assault accusations. His return is uncertain. May underwent Tommy John surgery in the middle of the 2021 season and he projects to be available for the late stages of the ’22 campaign.

The Dodgers starting five is significantly better with Bauer and May, but they still possess a solid group that will keep them in contention.

Again, no shock here as the Astros are constantly hunting a World Series title.

There are a few departures like Carlos Correa, Zack Greinke and Kendall Gravemen that weaken Houston.

The team signed reliever Hector Neris to strengthen the bullpen. But the Astros have yet to sign a suitable replacement for their former shortstop.

While Houston possesses talented hitters like Jose Altuve, Alex Bregman, Yuli Gurriel and Yordan Alvarez, but there is a hole without Correa.

Justin Verlander resigned with Houston, so the core of starting pitching is still intact. The Astros may call up one of their top pitching prospects in Hunter Brown to fill a spot if needed. Later in the year, an interesting player to watch is right hander Forrest Whitley. The former top prospect is recovering from Tommy John surgery. With a five-pitch repertoire, Whitlety can spark the Astros when he debuts. It is estimated he will be fully recovered by the middle of the season, and can be used as a starter or reliever.

There is still plenty of competition for the AL pennant like the Chicago White Sox, Tampa Bay Rays and New York Yankees. With odds listed at +450, +550, and +550 respectively the Astros face tougher competition than the Dodgers will for a pennant.


Let our MLB betting guide help you bet on baseball.

Whether it’s opening day or the World Series, sportsbetting3.com has all the picks for MLB and other sports to get that extra money!