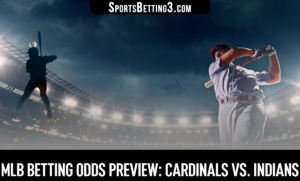 The St. Louis Cardinals and Cleveland Indians meet once again on Wednesday night at Progressive Field in the second game of a three-game Interleague series.

The Red Birds own the best winning percentage in baseball (.719) and a 23-9 record overall, but odds makers have favored the Indians in this one behind righty Corey Kluber, with a price of -132 on the moneyline, as the Cardinals counter with big right handed pitcher John Lackey.

The total on the MLB odds board is set right at 7 runs, with even money on the OVER.

While the Cardinals can boast the best record in the bigs, they are a modest 9-6 on the road this season, but the Indians are off to a poor start with an 11-20 overall record, including just 5-11 at home.

Additionally, each of the Cardinals 15 road games this season has been decided by three runs or fewer, with the expection of last night’s 8-3 victory. St. Louis is 19-5 this season when facing a right handed pitcher compared to Cleveland who won just 8 games so far in the early going against a righty versus 11 losses.

Even worse, the Indians are just 5-11 in their last 16 interleague games played at home. However, one interesting note that favors the Indians is their 14-7 all-time record in Interleague play against the Cardinals.

If that plays a factor or not still remains to be seen.

If your eyeing the total, you might want to take a good look at the OVER, as the ump behind the plate in this one (Mike Everitt) has a history of high scoring games as of late, with his last four eclipsing the number when he is calling balls and strikes.

Overall, Kluber is a solid starter for the Indians, but it’s rare to grab the Cardinals as a dog, so with a take back of +122, the Cardinals hold better value in this contest.