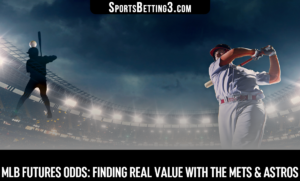 Now that we are thirty plus games into the MLB regular season, some teams have turned out to be a huge surprise, while others have been a huge disappointment; and of course, good or bad, some have lived up to their expectations – at least to this point.

In this article we take a look a two teams who hold a ton of value on the MLB Futures odds board and could prove to be a good investment for bettors looking to cash in with nice dividends come October.

The New York Mets are currently priced at 14/1 to win the World Series, and trail only the Cardinals and Dodgers for the best record in the National League.

Currently, the Mets are in first place in the NL East with a 20-12 record and a .625 winning percentage. Additionally, New York is a gaudy 13-3 at home and showing no signs of slowing down.

The Mets are also priced at 7/1 to win the National League Pennant.

If you haven’t done so yet, placing a  Futures bet on New York could turn out to be profitable at season’s end.

The Houston Astros are priced at 18/1 to win the World Series and have been one of the more pleasant surprises around the league.

Currently in first place in the AL West with a 20-12 record and a five game lead over the second place Angels, the Astros  continue to separate themselves from the rest of the pack.

Even more surprising, the Astros are taking care of business on the highway, with a very impressive 12-4 mark – compared to just a modest 8-8 record at Minute Maid Park.

It’s still early and there is a lot of baseball to be played, but the Mets and Astros are two teams that have not come close to winning in recent memory, but now, they are positioning themselves as two of the elite teams in the bigs and bettors everywhere are taking notice.