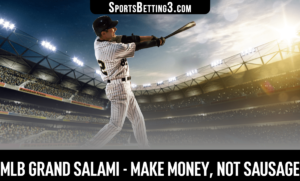 Betting on Major League Baseball is a grind. From April until August, there are games nearly every day offering all kinds of different opportunities. However, based on how teams start the season, there are plenty of opportunities in the future market.

Some teams have gotten off to starts that may not sustain deep into the summer. Others are still putting together pieces before finding a way to make a run at the pennant. By placing bets before the end of May, there are plenty of opportunities to get plus money in MLB division races. Here’s a look at a few numbers offering value.

You can find me in Saint Lou-eh

The National League Central is bad. Three of the teams already look hopeless enough that their betting odds are well north of 10-to-1. However, the St. Louis Cardinals appear to offer a good shot at getting plus money.

St. Louis is currently plus money at +165 behind the division’s favorite Milwaukee Brewers. The Cardinals, who recently dropped two of three to the New York Mets in a feisty series, are 10-7 and 1.5 games of Milwaukee. While St. Louis has dropped four of its past five games, the Cardinals have the makings of a contender.

St. Louis is led by Nolan Arenado, who leads the team with a .375 batting average and has belted five home runs. The Cardinals have plenty of power in their lineup but have started slowly. Right now, St. Louis is 23rd in the league in home runs with 13.

Starting pitcher Miles Mikolas is off to a good start and he is supported in the rotation by veteran Adam Wainwright.

Signs from the heavens?

The Los Angeles Angels have two of the most exciting players in baseball — Mike Trout and Shohei Ohtani — and haven’t made the playoffs since 2014. For a pitching staff lacking depth, Los Angeles will need to lean on its star power to reverse the trend. The Angels sit in first place after the first month of the season.

Los Angeles is worth a shot at +350, as the Houston Astros are currently a -175 favorite to win the crown. The Angels had shown they have the power to make a run. Los Angeles ranks second in the league in home runs, having belted 25. Trout leads the team with five, while Taylor Ward has four and Joe Adell and  Ohtani have three apiece.

Los Angeles hasn’t had a winning season since 2015, but with its star power and manager Joe Madden, this could be the year the Angels turn things around.

Toronto on the rise

The Blue Jays odds have slid slightly since the season started. Toronto, though, is off to a 12-7 start and is within striking distance of the first-place New York Yankees. Betting on the Blue Jays to win the World Series at +775 is a good number.

There is no denying the Blue Jays have the offensive clout to get things done. Toronto leads the league with 26 home runs. Vladimir Guerrero Jr. leads the Blue Jays with five homers. George Springer and Matt Chapman have also driven in 10 runs apiece.

New York Mets ownership hasn’t been shy in investing money into the franchise and has started to see results. The Mets are off the best start in baseball, compiling a 14-6 record, and are +550 to win the World Series.  The backbone of this New York team will be its pitching.

The Mets have also been excellent on the offensive, producing the second-best batting average so far and are averaging 4.7 runs per game, which ranks sixth in the league. Max Scherzer has been his usual excellent self since joining New York.

Scherzer has compiled a 1.8 ERA with 33 strikeouts in 25 innings of work. Scherzer’s 3-0 start and excellent all-around performance have given the Mets a true ace at the top of their rotation.