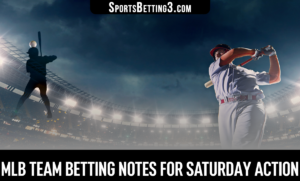 There is a full slate of games on the MLB betting board for this Saturday and we have taken a look at four key matchups and included some relevant notes to help you before making your selections.

Over their last 10 games, the A’s are scoring an average of just 3.0 runs a game, which is down from their season average of 4.2 per contest. The A’s have won four straight against teams from the AL East.

The Red Sox have won just one of their last five games played away from Fenway Park and are 12-15 overall on the road so far this season.

The Rangers are 8-2 in their last 10 games overall, but just 5-11 in their last 16 at home. They own an 8-4 record against teams from the AL East in 12 games played against them this season.

The Royals have enjoyed much success against teams from the NL Central, winning six of their last seven. They are also a very good road team in interleague play, having won 10 of 13 in this spot.

The Dodgers have not faired well against teams from the NL Central, winning just two of their last seven overall. Even worse, the Dodgers have won just once in its last five meetings with the Cardinals in St. Louis.

The Cardinals are a very impressive 19-5 at home this year and are currently on a five-game winning streak. Additionally, they own the highest winning percentage (.667) in all of baseball.