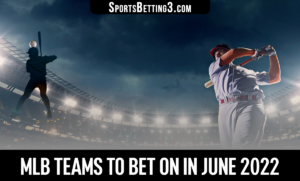 Looking ahead in the month of June these are the best teams to bet on this month. This article discusses this month’s best picks only, not World Series favorites. So, if there are some teams that look like favorites to win the AL or NL pennant but not here, it may be a tough schedule for that team.

Houston ended May on a sweep of the Oakland Athletics, and took two of three from the Kansas City Royals. The Astros play four of the seven series against sub .500 teams.

Opponents like Seattle, Miami, Texas,  and Chicago White Sox should give the Astros a lot of wins and increase the lead it has in the AL West division. The other three series are against the New York Mets and Yankees with the final game in June against the Yankees.

That being said the final nine days of June see Houston take on the Mets two games, Yankees four games, Mets two and a make-up game with the Yankees. Houston’s toughest part of the schedule plays  in the last nine days.

A few games behind the Los Angeles Dodgers are the San Diego Padres. With a good run, the Friars could sit atop the NL West division

Looking at San Diego’s schedule, it faces the Mets, then the Dodgers in a series that bleeds into July, and those are the only above .500 teams. As of writing this, San Diego tied the series with a 7-0 victory on Tuesday.

The Braves avoided a sweep against Arizona the first day of June. Atlanta swept the Rockies in a four-game series. Atlanta is clicking right now, and as evidenced by the remarkable run in the latter part of the season, when the Braves are hot it can result in a ton of wins.