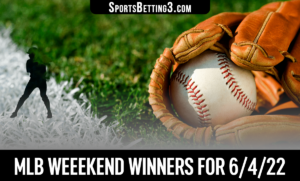 Hello again everyone, and welcome to Weekend Winners.

Discussed below are the three easiest MLB games to target for Saturday, June 4.

It is unclear who the Yankees put on the mound for Saturday’s game. But options like Jordan Montgomery, Gerrit Cole, or Luis Severino are great pitchers. It is a terrible match up for the Tigers, and with a solid bullpen backing either of those starters, it does not look like Detroit scores more than a few runs in Saturday’s game.

Bettors, choose the Yankees, bet over on runs, and Tigers do not cover the spread.

Triston McKenzie owns a 3-4 record with a 2.65 earned run average (ERA). The pitcher also possesses a 0.86 walks and hit per inning (WHIP), so he is not a horrible pitcher, just unlucky at times.

Simply put, McKenzie is in a groove of sorts lately and he faces an opponent like Baltimore who are one of the worst offenses in the league. The Orioles place in the bottom tier of team BA, OBP and runs scored.

While Cleveland is not a sensational team from an offensive standpoint, there is a difference in those categories between them. It is not hard to imagine Cleveland gives McKenzie a two-run lead and he deals a gem.

Bet on the Guardians, bet on Baltimore covering the spread and the under on runs.

Despite losing two of his last three starts, Luis Garcia is one of Houston’s best starters.

Similarly to McKenzie, Garcia surrendered six runs but in 15 innings pitched, he has been unlucky at times as nothing in his game logs screams trouble It is simply just a bad start where Garcia surrendered four runs and took the loss.

While Houston does not light up the league offensively in years past, it currently is in the bottom the league in team BA, the Astros are an exceptional team.

Both offenses rank similarly in team BA, OBP and runs scored, but Garcia is the difference maker in this game. He can pitch well, potentially get a lead and hold the Royals until the bullpen takes over.

Another aspect is the pitcher-friendly field. Kauffman Stadium, home of the Kansas City Royals, is considered better for pitching than hitting.

Bet on the Astros, bet on the Royals covering the spread and under on runs.