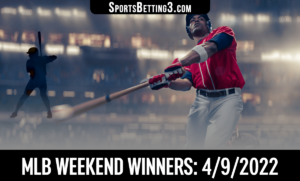 With a loaded 15-game MLB slate, Saturday presents bettors a plethora of opportunities to make money throughout the day.

Here on Weekend Winners, the team at sportsbetting3.com look at some of the easier choices and dissect why these spots are easy to target.

The Orioles pitching staff is atrocious, and it allowed a 5.84 ERA in 2021. With a 1.48 WHIP in 2021, Baltimore constantly puts runners on. The Rays should capitalize on this terrible pitching staff, and put up runs quickly.

What separates the teams is the pitching as the Rays team ERA of 3.67 was in the top 10, which is a stark contrast to Baltimore.

In a pitcher-friendly park like Tropicana Field, this contest favors the home team. Expect a 3-1, or 2-0 game in this.

The Dodgers can roll out a quality starting pitcher, but the Rockies do not have that same luxury.

In Coors Field it is about the offenses, and LA is far superior as it possesses one of the scariest lineups in the league. Despite a .244 team BA, the Dodgers placed fifth in team OBP at .330 in 2021.

The batting average and OBP may balloon for LA with a full season of Trea Turner and Freddie Freeman in the lineup too.

This game will be an offensive showcase, and it could just be a Dodgers explosion, or the Rockies may join in. Either way expect LA to win and take the over on runs.

After Tommy John surgery forced Verlander to sit out in 2021, the 39-year-old should be on a strict pitch count.

The Angels possess three solid bats in Anthony Rendon, Mike Trout and Shohei Ohtani at the top of the order. A rusty Verlander may struggle, and surrender some runs.

Houston boasts a strong lineup too, and can put up runs as well.  The Astros led the league in runs with 863 in 2021. Also, Houston topped the league in team BA and OBP with .267 and .339, respectively.

This game relies on the bullpen of each team, and Houston’s bullpen outshines the Angels. It should be an interesting game with a steady amount of runs throughout. Pick the over on runs, and take the Astros as favorites.