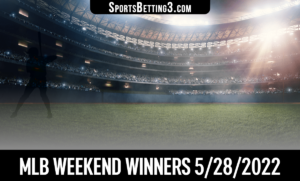 Here is another installment  of Weekend Winners where we look at the three best games to target.

The weekend edition covers the games on Saturday, May 28.

The Reds proved to be one of the worst teams in the league, so anytime Cicny takes the field it is a game worth targeting.

San Francisco does not possess the flash and glamor as other ball clubs, but it consistently produces solid teams.

In the top of the league in team batting average (BA) and on-base percentage (OBP), San Fran finds ways to get on and score. Against a Reds team that possesses the worst earned run average (ERA), this should be a cakewalk for the Giants.

It is worth mentioning both of these teams claim horrible run line records, which is the covers, no-covers and pushes.

Keep that in mind when betting. Bet the over on runs because the Reds ballpark is hitter friendly. Do not expect the Reds to cover a spread, and expect the Giants to win and push over the spread.

Another case of a great team playing a subpar team.

The intriguing part of both of these teams is the run line record.

Both teams rank in the top for run line records.When it comes to run line, spread and covers these two teams get it done, and combined it should be something bettors take into account.

Statistically, Los Angeles places in the top of the league in team BA, OBP and ERA for an all-around amazing team.

Bet on the spread covered, LA to win, and the total on runs.

Tough call between this game and the Rockies and Nationals, but this game possesses clearer discrepancies.

San Diego’s team BAs is not far off from Pittsburgh, but the Padres OBP is marginally better. The Friars  pitching is far superior as well to the Pirates.

Bet San Diego to win, bet the under on runs, and Pirates to cover because it can keep it within two runs.