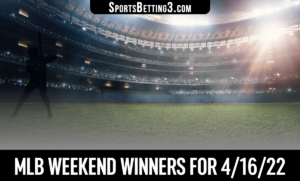 Another weekend of MLB brings another edition of Weekend Winners here at Sportsbetting3.com. If you missed the first one, let’s go over the purpose of this. Three games are broken down and picks are advised based on what we think.

The Diamondbacks can score runs on Saturday, but the relievers can blow the game too. In 2021, Arizona posted a 5.11 ERA, and it is possible that the bullpen is still horrible.

The Mets offense appears solid so far, and with a matchup against the weak Arizona bullpen, New York can score a lot Saturday.

Carols Carrasco lines up to be the next starter by Saturday for New York, and he is coming off a quality start in Sunday’s game against the Nationals. In 5.2 innings of work, Carrasco struck out five and allowed one runs on two hits en route to a no-decision. Carrasco possesses a great chance to win and is in one of the easier spots on Saturday.

Bet on the Mets as favorites, over on runs and do not expect Arizona to keep it close.

The Yankees rely on homers, and with horrible pitching in a small park, New York is in a prime spot.

Another game where the over on runs, and a blowout seem more likely. Same as the aforementioned Mets, over on runs, opponent not to keep it close and pick the other New York team as favorites.

Second game where a team from the week prior is mentioned, but sometimes that is how baseball works.

After a horrible start in Colorado, Julio Urias takes the mound in a rebound spot against the Reds at home. The left-handed pitcher posted a remarkable 20-3 record in a career-defining season, and if this is a step forward, then Urias won’t throw too many duds this year, especially back-to-back. Dodger Stadium favors pitching too, so Urias should thrive in front of the home faithful in a great park.

Not to knock the Reds because it did split a series with the Braves and are a respectable team, but this feels like a Urias get-right spot.

In 2021, the Dodgers recorded a .244 team BA and .330 OBP, and with the addition Freddie Freeman and a full season of Trea Turner, those numbers should inflate this season. Los Angeles owns one of fiercest lineups in baseball, and the potential to score a lot of runs is always there.

Bet the under on runs, expect the Reds to cover and take the Dodgers as the favorite.

At Sportbetting3.com, expect quality content that helps the bettor make some extra income on the sports they love. Whether it is early April or late October, count on Sportsbetting3.com for all your baseball needs!