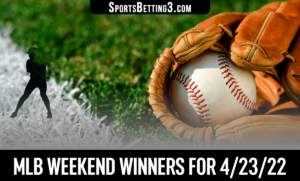 Welcome to the third edition of Weekend Winners! This weekend we focus on some familiar spots and teams that we did the Saturday prior. These situations worked well, so no deviation needed.

The Rockies started the season hot, and are a pleasant surprise in the NL West. Meanwhile Detroit sputtered at the beginning of the season, and are one of the lowest scoring teams in the league.

No one on Detroit hit well in the first 10 games on the season, but Colorado did. Three Rockies hitters batted above .300 in the early part of the campaign. Overall, these are teams notorious for being in the bottom of the league, and it would not be shocking if this is year is the same story.

In the pitcher friendly Comerica Park, expect limited offense from either team, even if Colorado is hot to start the year. The Rockies potent early offense should carry it to the win in this contest, but in a low-scoring affair like 3-1 or 2-0.

Bet the under on runs, but if the Tigers are +1.5 then bet Detroit to cover.

Last week we covered this game, but it played in New York instead of Arizona. Carrasco pitched well for the Mets, but a late rally from Arizona gave the D-backs a win.

This game is in Arizona, which is better for hitters than Citi Field, and puts the offense in a better position this week.

New York failed to score against a terrible bullpen. This is more of an exception than the the norm for Arizona, and until the bullpen improves, the same point will be made. Arizona’s pitching gave up an ERA of 5.11, and with no significant changes, this staff will collapse eventually. In the other games in the series New York scored 10 and five runs, respectively.

Going back to the well on this game, over on runs and do not expect Arizona to cover the spread.

Baltimore strikes out a ton, and is one of the worst offenses in the league. Despite a great comeback Sunday against the New York Yankees, five runs is abnormal for the Orioles.

Noah Syndergaard takes the mound for Los Angeles on Saturday for his third start of the season. In his 11.1 innings pitched, the right hander owns a 1.59 ERA and a walks and hit per inning (WHIP) of 0.79. The strikeouts are down so far this season, but Syndergaard should keep Baltimore under control for the game.

Los Angeles possesses two of arguably the greatest hitters in the game with Mike Trout and Shohei Ohtani at the top of the order.

That said those two could spark an early offensive explosion and carry it throughout the game. If an early lead does not happen, do not rule out a late charge in the game either because these are two excpetional hitters capable of starting a rally whenever.

This game feels like the previous Baltimore Orioles game covered. Bet the Angels to win, Baltimore does not cover the spread and over on runs.