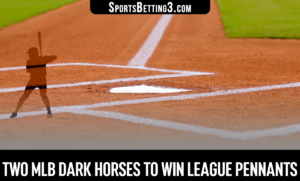 As the All-Star break looms in July, the favorites become clearer on what team will be in October vying for a World Series.

Teams stand at least 35% complete with the season, and there is plenty of time to make a run. There are perennial favorites, but these teams can surprise the league with a pennant.

For each league these are two teams that make a legitimate case for the pennants.

The Padres own the top Wild Card spot, and are close to the Los Angeles Dodgers for the division lead.

As the month of June progresses, San Diego plays sub .500 teams for the rest of the month before a series with the Dodgers.

The Friars starting rotation is lights out as Yu Darvish rebounds from an abysmal 2021 season. The real anchor is Joe Musgrove who posted a 7-0 record with a 1.50 ERA in 11 starts. San Diego fans must be happy with top prospect MacKenzie Gore too. The rookie owned a 4-2 record and 2.50 ERA through nine starts.

Fernando Tatis Jr. is injured at the moment, but San Diego is playing great ball without him.

Once the shortstop comes back, the Padres can make a solid case for a division title.

Once well below .500, Atlanta used the early part of June to surge into Wild Card contention.

Now that Ronald Acuña Jr. is in the lineup regularly, he provided a spark to a struggling offense.

The Braves soon face the Dodgers and San Francisco Giants in the later part of June.

Atlanta plays the Washington Nationals, New York Mets, and Philadelphia Phillies in July, which should give the Braves an edge given the current state of the team.

Reminiscent of Atlanta’s run in 2021, the team surged from below .500 to contenders, which it may be doing again.

Facing off against the Yankees or Astros prove troublesome, but Chicago owns solid pitching, which makes it a dark horse. The White Sox placed below .500, so it is a long shot, but the Chicago is vying for its’ third-straight playoff appearance.

Dylan Cease builds off an impressive 2021 campaign with similar numbers this season. The emergence of Michael Kopech shows promise for the Sox as well. The ace for Chicago, Lucas Giolito also proves solid for the team too.

The offense staggered in the beginning of the season, but may take a step forward in the upcoming months. A vital piece to this is third basemen Jake Burger. Regarded as the White Sox’s third-best prospect in 2021, he’s proved himself at the big league level. The success of the offense, and Burger, can propel Chicago to a pennant.

The dark horses of the AL may just be what color socks does one believe in more as Boston makes a strong case too.

Currently fourth in the AL East against the New York Yankees, the road proves difficult. The Red Sox are surging and possess an opportunity to climb the Wild Card standings as it sits third.

Moving forward, 17 of the next 32 games are against division rivals as the Blue Jays, Rays and Yankees all face Boston.