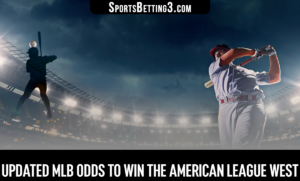 To look at the current standings in the American League West division, one would think they are reading things upside down, but the reality is the projected good teams are bad and the projected bad teams are good. And that is to say the Astros – the Rangers we all knew would be bad.

As for the Mariners and Angels, they are certainly not living up to exceptions, and I for one am not surprised with the A’s lackluster effort.

Let’s take a look at the updated odds to win the American League West.

The Astros own a .658 winning percentage, with 25 wins and just 13 loses and have been the surprise team in baseball through the first two months of the season.

Furthermore, the Astros are getting it done at home (13-9) as well as on the road (12-4) and are showing no signs of slowing down as they are in the midst of a five-game winning streak.

Oddsmakers have taken notice of their hot start and six-game lead in the division and have priced them ahead of the rest of the pack in the AL West.

Losers of their last two after winning five straight, the Angels and their high payroll are proving to be a disappointment thus far in the early going as they are a mediocre 19-19 and just .500 on the season.

The Angels must turn it around and in a hurry or else the Astros can run away with this division by the All-Star break.

One telling stat that sticks out for the Halo’s is their poor 5-7 record in one run games.

High expectations in Seattle during the offseason has turned into a number of question marks. The Mariners were projected to be one of the best teams in MLB this season, but so far they are three games under .500 with a 17-20 record.

The Mariners are just 6-10 on the road and must improve that mark if they are to have any shot of turing their season around and making a run.

The A’s are already 12.5 games out of first place and have won just 13 games compared to 26 losses. They have been brutal at home with just a 5-14 record.

Oakland has been involved in six extra inning games are are winless at 0-6. Expect a fire sale by the All-Star break if they don’t improve drastically over the next six weeks.

The Rangers are 16-22 in the early going, but they are not contenders this season and the oddsmakers know it as they have priced them generously on the MLB futures board.

Texas like Oakland has also played poorly at home – going just 6-13 in nineteen outings at Rangers Ballpark in Arlington.

Look out for more updated division odds as we will take a look at the rest of the MLB teams in upcoming articles.