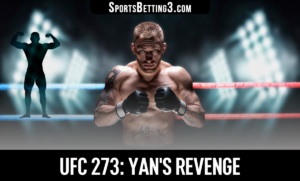 The featherweight championship bout between Alexander Volkanovski and Chan Sung Jung, better known as the Korean Zombie, has the misfortune of being in a jam-packed UFC 273 pay-per-view. The storyline in that fight pales in comparison to others below it on the card.

The fight card will also feature a grudge match title fight in the bantamweight division with interim champion Petr Yan fighting champion Aljamain Sterling. Also, a rising superstar in the Welterweight division, Khamzat Chimaev, will take a major step up in competition when he fights former title challenge Gilbert Burns.

Where is the value on this fight card? With the UFC, there is value on many fights because of the number of ways to bet each contests. Prop bets on each fight help bettors find better value and present opportunities to make money without worry about whose hand gets raised.

Here’s a look at a few bets for this loaded pay-per-view.

Time to prove it

Kay Hansen is returning to the straw weight division following a decision loss to Jasmine Jasudavious at UFC 270 in January. Hansen, who is 7-5 overall, is trying to avoid a three-fight losing streak and is a +105 underdog. The 22-year-old American is taking on a debuting prospect Piera Rodriguez.

Rodriguez earned her contract on the Dana White’s Contender Series. So far, Rodriguez has a 7-0 professional record with five of her wins have come by knockout. On DWCS, Rodriguez grinded her way to a division over Valesca Machado. This will be a big step up in competition for Rodriguez.

Hansen is much more well-versed in the ground game than Rodriguez. Of her seven victories, Hansen has finished four by submission and knocked two opponents out. If Hansen wrestles and can get Rodriguez to the ground, Hansen may be able to get a submission or grind out a decision.

Avoid betting on this debuting prospect and take a shot on a veteran desperate for a win at plus money.

Sterling’s DQ victory and victory over Yan will remain one of the more controversial title changes in UFC history. Sterling won the title from Yan after the Russian kneed Sterling in the head while Sterling was grounded, which is illegal in the UFC. Yan believes Sterling oversold the injury and delayed their rematch out of fear of the fight.

However, Sterling hasn’t fought since the knee landed, with his last bout coming against Yan on March 6, 2021. The bad blood between the two is legitimate and still boiling.

Yan is the bet for this fight, but the moneyline is too high at -480 to bet the Russian straight up. In the first fight, Yan only allowed Sterling to record 5 percent (1 of 17) of his takedown attempts. Additionally, Yan landed seven takedowns of his own. While Sterling held an edge in significant strikes, he appeared gassed before the fight was stopped in the first round.

Betting over 3.5 rounds at -167 would be a strong bet for this fight. While Yan has been dominant in recent fights, he has only won eight of his 16 career wins by finish. Betting Yan to win by decision at +125 may be worth a small wager as well. Sterling is more than game and has good enough movement to avoid Yan’s power in the pocket.

Khamzat Chimaev took the UFC by storm during the COVID-19 pandemic. Chimaev debuted on Fight Island vs. John Phillips on July 16, 2020 and won his first fight by submission 1 minutes, 12 seconds in the first round. In his next three fights, all stoppage victories, Chimaev knocked Rhys McKee and Gerald Meerschaert out before submitting Li Jingliang in October 2021.

Chimaev, who is a citizen of Sweden, is now 10-0 in his career with all 10 bouts ending instead the distance.  Now, Chimaev is taking a big step up in competition by fighting former title challenger Gilbert Burns.

Burns bounced back from getting knocked out by Kamaru Usman at UFC 258 in February 2021 by winning a unanimous decision over Stephen Thompson last July. Burns has a diverse skillset that will push Chimaev. In Burns’ 20 career victories, he has won six by knockout and eight by submission.

There will be a lot of pressure in Chimaev to maintain his finishing ability to keep rising up the rankings. Chimaev has a four-inch reach advantage and will want to take advantage of that against an undersized Burns, who is 5-foot-10, compared with Chimaev, who is 6-2.

While Chimaev is likely to win this inside the distance, this isn’t going to be an easy fight for him. Burns has fought some of the top guys in the division and won’t be willing to give away his ranking to the hottest prospect in the sport.