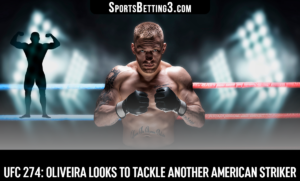 When it comes to the main event at UFC 274 one thing is for certain: Brazilian Charles Oliveira and American Justin Gaethje will be ready to put on a show for the lightweight championship. Oliveira, the current champion, is the UFC’s all-time record holder in submission victories (15) and total finishes (18).

Gaethje, who is 23-3 all-time, and fighting in for the championship for the third time will be ready for Oliveira. Gaethje, who won the interim lightweight championship in a bout with Tony Ferguson in 2020 before losing the unification bout with Khabib Nurmagomedov later that year, is reckless fighter who looks for finishes.

But while UFC’s main event promises for excitement, there is plenty of action available on this pay-per-view, which also features a championship bout between Carla Esparza and Rose Namajunes. Here’s a look at some fights to bet on.

Cowboy could be ready for last ride

Lightweight Donald Cerrone has been fighting in the UFC since 2011 and is tied with Andrei Arvloski and Jim Miller with 23 victories inside the octagon, which is the most in company history. However, things have turned ugly for Cerrone over the past few years.

Cerrone is 0-5 with a no contest since his last victory over Al Iaquinta on May 4, 2019. Cowboy is enormously popular with the fans, but was never able to capture UFC gold in his career, being knocked out in 1 minute, 8 seconds by Rafael dos Anjos is his lone championship fight.

Cerrone, who says he still wants to fight for his son, is a -177 favorite against Joe Lauzon. Lauzon, who hasn’t fought since Oct. 18, 2019, has lost three of his past four fights and is 28-15 in his career. There is a serious question of ring rust following his absence from the octagon.

Due to Cerrone staying more active, the American will pick up a victory.

Eight years in the making

Esparza became the initial UFC women’s strawweight champion on Dec. 12, 2014 when she submitted Namajunas to win the championship. However, Esparza would be knocked out in her next fight by Joanna Jendrzejczyk and has spent the last seven years chasing another opportunity. Esparza, who is a +158 underdog to Namajunas in the rematch, has found her groove recently.

Esparza (18-6) has won five straight fights and looks as disciplined as ever. During Esparza’s winning streak, she taken her opponents down 17 times. Esparza also finished her last fight with a KO of Yan Xiaonan. Meanwhile, “Thug Rose” is one a three-fight winning streak of her own.

Following a bizarre loss to Jessica Andrade where Namajunas, who is a -210 favorite, was knocked out via slam, she has run off three consecutive victories, two of which came by split decision. Namajunas is a worthy champion, but has areas Esparza can exploit.

Esparza should be able to force this down to the mat and is worth a flier at +158.

Mama says knock you out

Gaethje has said many times during his career he has no interest in going the distance. When it comes to his fights, he wants to knock out out or be knocked out. Having such a mentality with Oliveira could lead to fireworks. Oliveira, who is a -210 favorite, has submitted 15 of his opponents in his career.

Gaethje, a +140 underdog, was submitted by Khabib when they fought for the title, but Khabib has a tendency to make anyone look weak on the ground. The question for Gaethje against Oliveira, who is a -177 favorite, is what can he do to keep the fight standing?

Oliveira has a wicked submission game and while Gaethje has an amateur wrestling background, he would be wise to stay off the mat. There are levels to grappling and Oliveira has the advantage there. When it comes to betting this fight, there are many options that make sense.