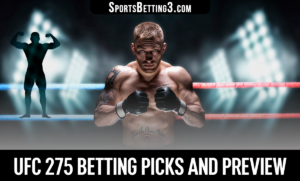 Glover Teixeria may be one of the most unassuming champions in UFC history. Entering UFC 275, the current light heavyweight belt holder has won six straight fights, but his understated personality keeps him out of the spotlight.

But what some people view as a negative for Teixeira is his age. The 42-year-old Brazilian champion reached his peak beyond the end of most fighter’s career cycles. Teixeira’s fight with Jiri Prochazka is one of two title fights at UFC 275. But there is plenty of value all over the card.

Here’s a look at some previews and predictions for the fight.

Joanna comes back for more

Former strawweight champion Joanna Jendrzejczyk looked like she had taken a brutal beating following her first fight with Zhang Weili at UFC 248 on March 7, 2020 in Las Vegas. Jendrzejczyk had brutal swelling on her face that made her forehead look deformed.

It was a difficult loss for the former strawweight champion, who defended her title five times during her initial run with the title. However, Jendrzejczyk (16-4) hasn’t been quite the same since losing by knockout to Rose Namajunas in November 2017. She has lost four of her last six fights, but all against top competition.

Weili (21-3) has lost her last two fights, both to former champion Namajunas. In the first fight with Jendrzejczyk, Weili won the fight 48-47 on all three scorecards despite losing the edge in significant strikes 186-165. While Weili attempted to bring Jendrzejczyk to the ground, she had little success, only converting 12 percent (1-of-8) of her takedown attempts.

With Jendrejczyk’s strong game on her feet, it is likely this fight may see the same kind of furious exchanges of punches. Weili did land a number of strong power shots against Jendrzejczyk, but couldn’t put her a way.

This fight may come down to a decision again.

Valentina “Bullet” Shevchenko has held an iron grip on the women’s flyweight since winning the vacant belt with a decision over Jendrzejczyk in December 2018. Shevchenko (22-3) has won eight straight bouts and will take on another challenge in Talia Santos.

Santos (19-1) doesn’t have much on her UFC resume since earning a contract following a win over Dana White’s Contender Series Brazil 2 in August 2018. After losing her debut, Santos has now won four straight fights. Her most impressive victory was her most recent one, a submission victory over Joanne Wood.

While Santos only has one pro loss, it is difficult to see her being a serious challenge to Shevchenko. The biggest challenge for betting Shevchenko is finding value. Her moneyline, at -670 is too much juice to bet straight up. There is no doubting Shevchenko’s dominance, but she hasn’t always been proficient at finishing fights.

In 11 UFC fights, Shevchenko has won six by decision. Shevchenko should be able to continue her win streak in this one against Santos, who is primarily a counter striker.

Winning a championship in his 40s has made Teixeira one of the more unique champions in the promotion’s history. However, being a good story didn’t earn him an easy opponent for his first title defense. Jiri Prochazka, a 29-year-old native of the Czech Republic, has been fast-tracked to a title shot after debuting in the UFC with knockouts over Volkan Oezdemir and Dominck Reyes.

With the power in Prochazka’s hands, Teixeira is going to want and try to get this fight to the ground. Prochazka, who is 29-2 in his career, has finished 25 of his wins by knockout. Teixeira has finished 28 of his 33 wins, including 10 submissions. Teixeira, who has never been submitted himself, has won his last two fights by rear-naked choke.

This isn’t a fight destined to go the distance. Prochazka is going to be aggressive on the feet and try to go for a knockout. However, Teixeira has shown over the past few years the wiley vet isn’t ready to concede the division to the young guys yet.