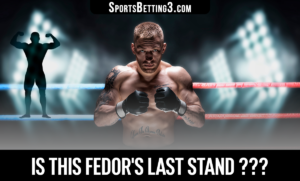 For more than a decade, Fedor “The Last Emperor” Emilianenko was the most feared and generally considered the best fighter in MMA. From April 6, 2001 through June 26, 2010, Fedor tore through 27 straight opponents with consumate ease. Among his victims, much larger men including Renato Sobral, Big Nog, Mark Coleman, Cro Cop, Matt Lindland, and Tim Sylvia. The only loss on his 32-fight career came on a doctor’s stoppage from a controversial cut.

On Saturday, July 30th, Fedor’s career is at a crossroads as he takes on Dan Henderson on the Strikeforce Card at the Sears Center, in Hoffman Estates, Illinois. Emilianenko comes in off two straight losses and will face Strikeforce light-heavyweight champion Henderson at a catch weight of 220. In this battle of two ex-Pride Champions, Fedor will take down a cool $1.5 million while Henderson will cash a check for $800,000.

Emilianenko is off back-to-back losses to Fabricio Werdum and Antonio “Bigfoot” Silva. Fedor was dominated in both fights with Werdum winning by submission (triangle armbar) in just 69 seconds while Silva beat Emilianenko to a bloody pulp before doctor’s ended things at the end of the second round. After a domination of the sport for almost a decade, was Fedor ripe to be picked ???

Signs that Fedor was slipping date back to fall of 2008 when Fedor was beaten in the Sambo World Championships in Prague. Sambo is a Russian combat sport developed in the 1920s that combines elements of judo, karate, wrestling, and local indigenous forms of hand-to-hand. Sambo literally translates out to “self-defense without weapons” and developed for the military. Fedor had gone unbeaten in combat Sambo for six years prior to that loss and could only manage a 6th place finish in the Russian Open Championship.

Is Fedor finished ??? He certainly gets no soft touch in Dan “Hendo” Henderson. The soon to be 41-year old Henderson has a record of 27-8 fighting nothing but the best competition at middleweight and primarily light heavyweight. His three losses since 2006 have come to Quentin “Rampage” Jackson, Anderson Silva, and most recently Jake Shields. Henderson rebounded to capture the Strikeforce light heavyweight title with a third-round TKO of Rafael Cavalcante. He’ll move up an additional 15 pounds to face Fedor.

The fight offers a classic dichotomy of styles with Fedor wielding the big striking edge but also owning a strong submission game if the fight goes to the mat. Henderson is a world-class wrestler that also packs a big punch. The fight could come down to cardio where based on current form, the edge would have to go to Henderson. Urgency goes to Fedor who would become non-entity or curiosity after suffering his third straight loss. Henderson can guarantee himself a couple of final big money fights as his career wind down and can lock in a solid legacy win.