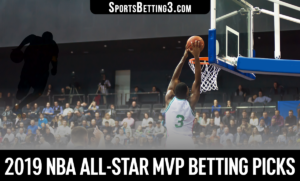 There are no bad players taking part in Sunday’s NBA All-Star Game. And there are really no bad odds when it comes to wagering on who will be voted the MVP.

The NBA’s showcase event is legally on the board in several states around the United States, but the offshores are offering some of the best gambling opportunities.

The favorite to be the MVP of the game is LeBron James, which should not come as a surprise. The guy tends to raise his game to another level as winter turns to spring, as attested by his eight consecutive NBA Finals appearances.

But with the guy coming off a very serious groin injury, the chances of his playing heavy enough minutes to win the MVP are somewhat reduced.

So who to play?

Well, the guy who keeps chasing Wilt Chamberlain’s record for consecutive 30-point games, James Harden, is an interesting pick at 10-1. Nobody ever plays defense in these games until late in the fourth quarter, which means Harden will have an opportunity to put the NBA’s best one-on-one skills to the test against defenders who would truly rather be on vacation.

Steph Curry is competing in the 3-point shootout along with his brother, Seth, and the expectation is that he will do little more than shoot 3s in Sunday’s showcase event. He is on the board at 7-1 as the fourth choice, and the advice here is to lay off.

The MVP of this game usually goes to showstopper, and there is no shortage of those types of players at this event. Russell Westbrook at 12-1 and Blake Griffin at 33-1 fit that bill, whereas Nikola Vucevic and D’Angelo Russell (both at 100-1) will likely see their playing time limited and are not wise picks.

So where is the value aside from Harden, Westbrook and Griffin?

Ben Simmons at 28-1 is not a bad idea, because the guy could rack up 20 or more assists in a game in which no defense is played. The guy couldn’t make a 3-point shot to save his life, but his passing skills will be on display in Charlotte.

Nikola Jokic has been overlooked by so many people throughout this season that he remains a decent MVP pick for the regular season – although he will need the Bucks and Giannis Antetokounmpo to fade out of first place in the East. For the All-Star Game, he is 66-1 to win MVP. For a guy who puts up triple-doubles with more regularity than anyone not named Westbrook, that is not a bad bet.