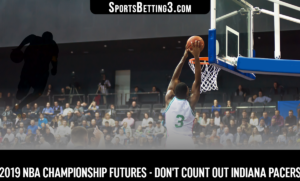 All was lost for the Indiana Pacers when Victor Oladipo went down for the season with a ruptured quadriceps tendon, correct?

The books apparently think so…and maybe it is time to be ahead of the books when it comes to the Eastern Conference’s No. 1 sleeper team.

The Pacers are currently 125-1 to win the NBA championship, making them longer shots than the Clippers, Wolves, Hornets and Pistons. Go figure.

Pacers On A Roll

Indiana lost only one key rotation player in the offseason when Lance Stephenson left to join the Los Angeles Lakers, and Friday night’s win over Philadelphia made it seven wins in eight games. Catching the Milwaukee Bucks or Toronto Raptors is probably out of the question, but capturing the No. 3 seed and advancing all the way to the NBA Finals is not out of the question for the team in the East that made the fewest offseason changes.

“What you saw was a team that looked like they had come off a break and was still on break for the first half,” Pacers coach Nate McMillan said after Indiana overcame a 20-point deficit. “The second half, we came out there and started playing the basketball we are capable of.”

There are value bets all across the board if you focus on teams that do not get a ton of attention from the national media.

The Portland Trail Blazers are 74-1 to win the NBA championship, and the addition of Enes Kanter makes them a force to be reckoned with – even in the stacked Western Conference. They knocked off the Brooklyn Nets on Thursday and followed that up by dominating the Philadelphia 76ers on Saturday…so grab that one before the sharps take notice.

Enes Kanter, formerly of the Knicks, was the perfect addition for them behind Jusuf Nurkic.