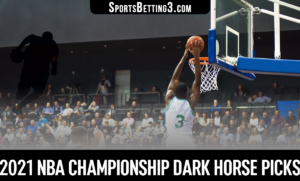 The 2021 NBA season has been marred by injuries of some of the league’s most exciting players. LeBron James has been injured for the entire second half of the season. He even had to go as far as to say, “I’ll never be back to 100%” when asked about how his ankle felt in his recent May 1st return. LeBron’s injuries and the Nets’ lack of health may have opened the door for one of our NBA dark horse picks to make some noise.

LeBron and the Nets aside — injuries have been brutal across the league. NBA Bubble star, Jamal Murray tore his ACL, Jaylon Brown is out indefinitely, and the list goes on. While this unfortunate reality has put a damper on the season — this does not stop us from finding betting value.

If you are looking to fade Brooklyn and the Los Angeles teams, the Philadelphia 76ers are your bet. They are the top seed in the Eastern Conference and have the best player in the conference. Joel Embiid is a matchup nightmare for any team.

Moreover, the 76ers have Ben Simmons who can defend the best perimeter player on the other team. The bench is legitimately strong and they should be higher than the Milwaukee Bucks on the odds. This could and should be the year for Philadelphia.

Big money has been flying on the Atlanta Hawks to win the NBA Championship in recent weeks. The Atlanta Hawks are 150:1 to win the NBA Finals; making this an extreme long shot. However, they do offer the scoring prowess to scare some of the NBA’s top teams. They are currently scheduled to play the New York Knicks in round one and the 76ers in round two.

They will surely be favored to beat the Knicks but that is the only series they would be favored in. Against the 76ers we would see them as big underdogs and from that point thereon. Is it going to happen? Probably not. But at 150:1 ($50 to win $7,550) we could do worse.

If you are not looking for an NBA dark horse pick, this is the only way to bet favorites. Why bet a winner when you can just bet the matchup?

The Los Angeles Lakers’ odds to win the west are at an all-time low. I believe that if you are going to make a Lakers bet, this should be the one. You are betting the favorite in the East (who are +100 to win the Eastern Conference) and the Lakers just to make the finals — not win it.

This is one of my favorite bets available across the board in the NBA.