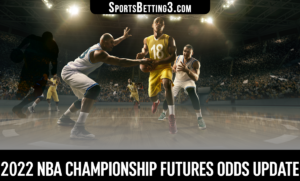 The NBA play-in tournament is upon us, and there is one team that is really keeping us on our toes. The Brooklyn Nets’ odds to win the NBA championship are +700, the third-highest in the league this year. They went just 43-38 during the regular season in Steve Nash’s second season leading the squad.

Now, the question will be if Kevin Durant and Kyrie Irving can perform better this time around in the 2022 playoffs after losing in the Eastern Conference Semifinals to the eventual champion Milwaukee Bucks. Those very Bucks are expected to win the East (+500 title odds) while the defending Western Conference champion Phoenix Suns (+275) are the title favorites.

The betting odds say that the Suns are the title favorites, but the Basketball-Reference’s playoff probabilities report and FiveThirtyEight’s predictions say the Boston Celtics. Before we get into the powerhouse of the East, we will start with the West, which surprisingly does not include LeBron James and the Los Angeles Lakers.

The top of the Western Conference is the cream of the crop in the NBA, and we will just include the top three since the No. 4-seeded Dallas Mavericks have to deal with Luka Doncic’s injury.

According to Basketball-Reference, the Suns have a 22.2 percent chance of winning the title. Similar to the San Antonio Spurs the year after they lost to the Miami Heat, the Suns are out for revenge in 2022. Interesting, FiveThirtyEight has the Suns — with a 19 percent of winning the title — behind the Boston Celtics (35 percent).

If Stephen Curry is ready and healthy for the 2022 postseason, then the betting odds are correct, or maybe have even underrated the Warriors. Basketball-Reference has the Warriors with the third-best title odds while FiveThirtyEight ranks them fourth.

The Grizzlies are very underrated, and if Ja Morant is going to take the next step, he can make a splash this year. FiveThirtyEight gives Memphis just a two percent chance at winning the title. However, Basketball-Reference has them at 9.9 percent, the fourth-best in the NBA.

The Eastern Conference has many more strong teams this year, but who will prevail?

Can the defending champs repeat? It seems like it is very possible, as FiveThirtyEight gives Giannis Antetokounmpo and company the third-best odds (12 percent).

The craziest situations in the NBA have surrounded the Nets all season, and we still do not know if or when Ben Simmons will play. So, can Durant and Irving get this team past the second round this season? The betting odds say yes.

The top two seeds in the Eastern Conference– the Heat and Celtics — are getting very little credit for strong 2021-22 seasons. Basketball-Reference sees the Heat and Celtics meeting in the ECF. Boston is even the title favorite according to FiveThirtyEight and Basketball-Reference. Also, you cannot forget about the 76ers, who have two superstars in Embiid and Harden.