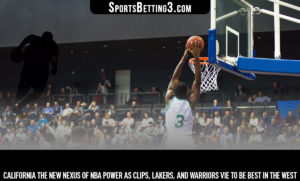 The Golden State Warriors have gone from the NBA’s most dominant team to perhaps the third-best one in California.

After another offseason of superstar movement, the Lakers and Clippers are confident they can end Golden State’s run atop the Western Conference and contend for an NBA title.

The Pacific Division rivals are part of a still-loaded Western Conference that has shifted philosophy from “Big 3s” to “Dynamic Duos.” The Warriors, hit by Kevin Durant’s departure and Klay Thompson’s long-term injury absence, still have core holdovers Stephen Curry and Draymond Green. The Lakers have given LeBron James an All-Star sidekick of his own in power forward Anthony Davis, while the Clippers added NBA Finals MVP Kawhi Leonard and Paul George in a high-profile overhaul.

And still lurking in Texas are a combustible pair of explosive scorers in Houston Rockets guards James Harden and Russell Westbrook, reunited for the first time since leading Oklahoma City to the 2012 NBA Finals.

Do the Warriors Have the Offensive Firepower to Keep Up in the West?

The grind of reaching five consecutive finals finally caught up to Golden State, which lost to Leonard and the Toronto Raptors. After two titles in three seasons, Durant left for Brooklyn to join Kyrie Irving. The sign-and-trade deal for Durant brought D’Angelo Russell to the Warriors to help fill the scoring void with Thompson’s absence.

Thompson is sidelined until at least the All-Star break recovering from a torn ACL suffered in the NBA Finals. That puts plenty of pressure on Russell, who averaged 21.1 points in helping the Nets reach the playoffs. Russell’s chemistry with Curry — a +550 offering for MVP — and Green will be scrutinized in real-time, with Green in the unaccustomed position of needing to score more.

That state of flux has made the Warriors a +1,000 pick to win a fourth title in six years. Golden State’s mystery ingredient is Willie Cauley-Stein, who Sacramento deemed expendable despite averaging 11.9 points and a career-best 8.4 rebounds.

For the first time since 2005, James had a legitimate offseason after an underwhelming first season with the Lakers. Injuries limited James to 55 games, and chemistry issues after a deal to land Davis fell through contributed to a 37-45 record.

Los Angeles mortgaged most of its future to land Davis, parting ways with three players and three first-round picks. The Lakers still have Kyle Kuzma, who is a natural third scoring option behind James and Davis. “The Brow” has averaged at least 24 points and 10 rebounds six seasons running, and his high basketball IQ should mesh well with James’ offensive skills.

Oddsmakers are convinced the pairing will work, making the Lakers +300 favorites to win the title. Both are also among the MVP favorites, with James +650 and Davis right behind him at +700. Like Golden State, the Lakers also have an X-factor in veteran Rajon Rondo. The point guard will take some of the ball-handling duties from James, who is still practically unstoppable driving to the basket.

Leonard Brings Winner’s Pedigree to Clips and George to LA

Second to the Lakers at +325, it can be argued the Clippers are the better-constructed team. Leonard offers value at +900 to win the regular-season MVP and gives coach Doc Rivers defensive versatility. The same can be said of George, who forced his way out of Oklahoma City after averaging a career-best 28 points. The All-Star forward is recovering from shoulder surgery and will make his debut in early November.

The Clippers’ biggest strength after Leonard and George’s star power is their interchangeable parts. Lou Williams and Montrezl Harrell are the NBA’s best offensive duo off the bench, while Patrick Beverley remains one of the league’s most tenacious defenders. The frontcourt rotation includes Moe Harkless and JaMychal Green, and Ivica Zubac will do the dirty work at center.

The over/under of 53.5 wins feels criminally low given the quality depth at Rivers’ disposal, and a Pacific Division title is definitely in play.