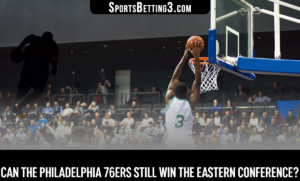 The Philadelphia 76ers came into the 2019/2020 NBA season with the fifth-best odds to win the NBA championship after pushing the Toronto Raptors to seven games in the Eastern Conference semifinals last season.

With Kawhi Leonard signing with the Los Angeles Clippers to team up with Paul George, the Eastern Conference title race was expected to be between Philadelphia, Milwaukee Bucks, and Boston Celtics. Philadelphia’s odds to win the title were at +750 at the beginning of the season and are currently +1600.

The 76ers looked like contenders after getting off to a good start, winning 23 of their first 33 games. However, they have gone 11-11 since then and dropped to fifth place in the Eastern Conference standings, which had led to fans questioning if the team has what it takes to win the conference title.

With less than 30 games remaining in the regular season, they will need to play well down the stretch if they want to earn home-court advantage in the playoffs.

76ers Need To Find a Way to Win on the Road

The 76ers’ defensive struggle on the road is one of the reasons they haven’t had a lot of success away from Wells Fargo Center, losing 19 of the 28 games they have played on the road. They have lost their last five road games and 12 of their last 13 road games, which is not a good sign for a team that wants to win the title.

With the team currently 13 games behind the Milwaukee Bucks, who have the best record in the league, and six games behind the Toronto Raptors, who are in second place, they will have to hit the road when the playoffs start, which will lead to an early exit.

Can Philadelphia Turn Things Around?

Looking at their schedule, the 76ers still have 13 road games left this season, but only four of those games come against teams that are currently occupying a playoff spot.

With only eight of their 26 remaining games coming against teams with winning records, the 76ers will have a chance to make up some ground before the season ends. However, unless the Bucks have a catastrophic meltdown before the end of the season, Philadelphia won’t finish better than second in the Eastern Conference.

Even though they have a relatively easy schedule the rest of the way, the 76ers have to avoid losing to teams they are expected to beat if they want to be considered legitimate contenders.