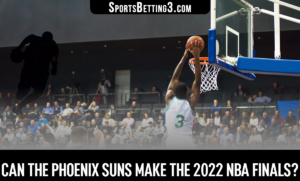 Can the Phoenix Suns make the 2022 NBA Finals?

Throughout the Phoenix Suns history, the franchise has come tantalizingly close to bringing a championship to the desert. During the 2021 finals, the Suns took the first two games from the Milwaukee Bucks and seemed primed to win their first title.

But things didn’t end how Phoenix hoped. Thanks to a phenomenal effort by Bucks’ star forward Giannis Antetokounmpo, Milwaukee won four straight games to steal the series. However, heartbreak in the finals hasn’t deterred the Phoenix Suns.

Phoenix blitzed the Western Conference this season, grabbing the top seed by assembling a 64-18 record. Coach Monty Williams has been named Coach of the Year for the second straight season by the coaches’ association. Could this be the year Phoenix reaches the finals and ends their drought? The Suns are currently favored by the oddsmakers to win the title, coming in with +235 odds.

For a look at how to bet the NBA, check out our betting guide. Here are a few reasons why the Suns can make the finals.

For a time in the regular season, Phoenix appeared to be headed for some concerning injury news. Point guard Chris Paul injured his thumb, but returned to play in the final seven regular season games and looked effective. Cam Johnson, Deandre Ayton and Devon Booker also missed time during the regular season.

Small forward Mikal Bridges, who averages 14.2 points per game, was the only Phoenix player to appear in all 82 games this season. However, the Suns’ issues with injuries seem to have resolved themselves. Entering Phoenix’s first-round matchup with either the New Orleans Pelicans and Los Angeles Clippers, the Suns don’t have any major injuries on their report.

Other teams are not healthy

The Western Conference’s other top teams are starting the postseason with major question marks. Dallas Mavericks star Luka Doncic has a calf strain and it is unclear of when he will be able to return for their series against the Utah Jazz. Steph Curry was injured in March and hasn’t played in several weeks for Golden State.

Should Curry not be able to play in the Warriors’ series against Denver, Golden State’s chances of winning decline significantly. The Nuggets aren’t spared from having injury woes of their own. Denver point guard Jamal Murray, who tore his ACL in the playoffs last season, still hasn’t returned from an injury and the Nuggets aren’t sure when, or if, he will come back.

Cam Payne, Bridges and Johnson also average in double figures scoring for the Suns. Johnson is one of the team’s best long-range scoring threats, knocking down 2.5 treys per game, which second only to Booker’s 2.7.

Phoenix’s biggest threat may not be ready yet

Memphis, which finished the season 56-26, has been one of the NBA’s best stories this season. The Grizzlies captured their first-ever division title this season. After entering the playoffs through the play-in tournament last year, Memphis developed into one of the heavy-hitters for this one.

The Grizzlies took two of three games from the Suns in the regular season and play a fun, up-tempo style. Ja Morant leads Memphis in scoring at 27.4 points per game, while the Grizzlies have six players who can score in double figures. But what Memphis will need to prove is that it can make up for a lack of experience.

The Grizzlies haven’t won a playoff series since they knocked off Portland in five games during the 2015 playoffs. Memphis also will have to battle through a fiesty Minnesota Timberwolves team in the first round and navigate past the winner of the Utah/Golden State series to face Phoenix.

If both teams make the conference finals, the Grizzlies could provide a stiff test, but Memphis has to prove it belongs first.