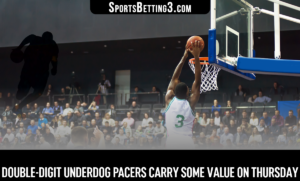 On Thursday, the Golden State Warriors (-10) go for the regular season series sweep against the Indiana Pacers on national television. The Pacers will be on the second night of a back-to-back, as they will be traveling from Los Angeles. Meanwhile, the 32-12 Warriors are coming off a 102-86 home victory against the Detroit Pistons, the league’s second-worst team.

The last time the Warriors and Pacers met on the hardwood was December 13, just over a month ago. At Gainbridge Fieldhouse in Indianapolis, Stephen Curry had a team-high 26 points, but he did have by far the highest number of turnovers in the contest with seven. The seven turnovers are also a season-high for Curry.

The Warriors did not cover the four-point spread in the 102-100 victory at Indiana that evening. Including that loss against the spread, Golden State is just 8-9-1 ATS in their last 18 contests. This comes after a tremendous start to the season for the Warriors, and they are still one of the league’s best ATS teams this season.

How the Pacers will Cover the Double-Digit Spread

The Draymond Green-less Warriors may be without Andre Iguodala as well due to left hip soreness. Klay Thompson made his triumphant return on January 9, and he scored a season-high 21 points in the victory over the Pistons on Tuesday. He got to the free throw line in that contest, and he may do so against the Pacers, who are among the worst in free throw defense this season.

However, the Pacers as a team have a strong 3-point defense. Although they allow 36 percent shooting from deep, they allow the fewest 3-point attempts per game and the second-fewest makes from downtown this season. It is important for the Pacers to keep the Warriors off the 3-point line, and if they do, they will have a decent chance at covering the double-digit spread in this contest.

The Pacers are hoping to get Malcolm Brogdon back from his Achilles injury on Thursday, and if they do, it would be a huge help against the Warriors. Speaking of injuries, Myles Turner is out for at least two more weeks due to a stress fracture in his left foot. Therefore, injuries could push this spread past 10 points.

The road woes are hard to ignore for the Pacers this season, especially if their bench is short for their second game against the Warriors this season. Indiana has consistently been one of the league’s worst teams away from home during the 2021-22 season.

On the bright side, the Pacers have performed much better against the Western Conference than their own conference. Maybe Indiana can keep up the success against the West on TNT on Thursday.