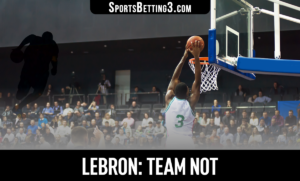 The NBA Bubble has oddly shown teams holding back players like preseason exhibitions. With teams like the Bucks, Clippers, Lakers, and many others sitting star players, the question will lead to how prepared they actually are for playoff runs. LeBron James is clearly concerned. After a game where James and Davis unexpectedly played 37 minutes each in a meaningless game versus Denver, James reacted in a post-game interview that the team is not mentally ready for the playoffs.

LeBron responded, “it’s a different type of mindset to get in… it takes a lot of energy and a lot of effort.”

He is doing his best to get the Lakers prepared for a playoff run by getting the offense in shape. Their offense is struggling and is near the bottom in most offensive categories. They are last in the NBA for 3 Point Percentage (28.3%), Field Goal Percentage (42.9%), and Total Points (104.1) since the Bubble started (stats provided NBA.com).

As the Lakers attempt to get their team into shape, we will take a look at how the other teams prepare for the playoffs. There are teams that are in need of some conditioning and chemistry, while others just want fresh legs.

All odds provided are consensus odds not one book in particular and are only to win the conference, not the title.

We told you to take Toronto last week to win the east, but sportsbooks have now all officially caught up with the instability in the Eastern Conference. Toronto is a whopping 6-1 in the bubble and poses a real threat to Milwaukee in the east. Interestingly enough, the Raptors don’t match up well with Boston as shown in their 122-100 loss. They locked up the second seed ensuring that they will only have to face one of Milwaukee or Boston. The Raptors will need to get baskets from Siakam like Kawhi provided in last years playoffs. Siakam will need to take a step forward and their ride to the Eastern Conference Finals much easier having locked up the second seed.

The Clippers never cared about the regular season. George missed most of the regular season and Leonard will not play back to back games. They have taken games off in the bubble as well. Leonard and George should be able to carry this team to the finals with the amount of rest they got. They are a fantastic value to win the title at +300 and those odds will continue to plummet as we get closer.

“It is Dame Time.” “Put Some Respect on my Name!” The Trailblazers are flying around the court and they look fantastic doing it. With a win over Brooklyn, the Trailblazers lock into a playoff bout with the Lakers. Many are saying this is the best 8 seed to ever make the playoffs and we agree. Lillard is a top 3 scorer in basketball and Carmelo Anthony has actually had a renaissance. The Melo’ swan song combined with the scoring outbursts by Lillard makes them a nightmare matchup for LA. Who on earth can LA throw at Lillard and McCollum?

LeBron’s comments are a little unsettling about the team. However, he has done it in Miami and Cleveland in the past. The Trailblazers are the best 8 seed in recent memory and there is no looking past them. Avery Bradley would have been the perfect defender to have. He leaves a massive gap in their backcourt. Lillard is on fire and even an injured McCollum leaves them in limbo. LeBron can’t guard everyone.

Ben Simmons is out for the year. This is going to fascinating to see. Embiid is going to run the entire offense. I am actually expecting the 76ers to play a better type of basketball with more spacing. Brett Brown will take the blame for the 76ers failures. They will search for a new coach and maybe reassemble their roster. Simmons needs to vastly improve his game this offseason before he is shopped to contenders. maybe even to Klutch Sports associates, LeBron James and Anthony Davis.

How is a 5-2 team inside the bubble possibly trending down? Their route includes going through Milwaukee in the Conference Semi-Finals. The Celtics have struggled against the Bucks and Giannis is unguardable. Tatum appears to be a budding superstar but has not shown the same energy to date. In order for the Celtics to outlast the Bucks, they must go through Tatum first. Kemba Walker’s health is going to be a question mark throughout the playoffs.