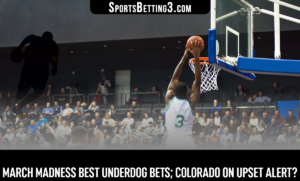 March Madness is known for just that; madness. Everyone remembers the crazy unpredictable wins and losses that turned the tournament upside down and ruined brackets. The March Madness underdog bets are the most fun and have a storied history.

Some notable round one upsets include, second-ranked 2012 Missouri being ousted against Norfolk State and Mercer University defeating Jabari Parker’s Duke (which I correctly predicted).

Everyone wants to find the big odds that will make you rich. The reality is, those bets are few and far between. I will throw a few of those out there. However, these bets are usually worth about half a unit or less.

Predicting Mercer to beat Duke at 12:1 is extremely rare. It is best to stick between the +200 and +100 area. The slight underdogs rather than the slight favorites.

Georgetown is red hot coming off their domination of the Big Ten Tournament. They annihilated Creighton in the championship game and also defeated a strong Villanova team. On the other hand, Colorado was upset by Oregon State in the PAC-12 championship game.

Georgetown looked phenomenal in the tournament and plenty of bets have come in on them to win the tournament in totality. Those bettors are grabbing Georgetown at 100:1 in many places. I guess there are worse 100:1 bets out there to take.

Speaking of Creighton, the Bluejays were thoroughly dominated by Georgetown. The game was non-competitive throughout. Despite being the second seed in the tournament, Creighton lost 73-48 to Georgetown in the title game. This is a rather debilitating loss and one that makes me unsure if they can rebound.

UC Santa Barbara had two early-season losses to UC Irvine. They righted that wrong by defeating UC Irvine in the Big West tournament. They end the season 22-4 and winners of the Big West.

With any longshot, there is always going to be doubt – or a reason not to take it. How about a reason to take it? West Virginia lost their last two games to Oklahoma State. Furthermore, looking at their record, they were just 18-9. While the competition has been fierce, I am legitimately worried about their 18-9 record and two-game losing streak.

Conversely, Morehead St. is on a seven-game win streak and won their conference. They are far from the most talented team in the tournament. I would even say that this is a solid matchup for West Virginia. However, the odds are far too high. I would never trust West Virginia as a near 10:1 favorite.