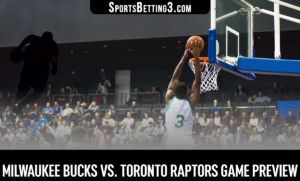 The Milwaukee Bucks and Toronto Raptors have already played one of their four games against each other this season, with the second installment coming on Tuesday, February 25th. It’s a game both teams have marked on their calendars as fans get to watch the top two teams in the East go head-to-head.

In their first meeting, the Bucks took the win 115-105 despite being outscored by the Raptors 40-29 in the third quarter. Both teams were fairly healthy at the time due to it being just the sixth game of the year. Kyle Lowry and Giannis each went off for 36 points, but it was the Bucks’ bench that ultimately came through.

It’s been a long time since they’ve met and the Toronto Raptors have gotten much better since. With that being said, Milwaukee hasn’t skipped a beat all year long. Anytime the league’s best offense matches up with one of the league’s top defenses, it’s a game that will draw a lot of betting attention.

Better yet, it’ll be televised on TNT so everyone can watch!

The Bucks will likely be the favorite going into this game, barring any injuries. It’ll certainly be a tough game for both teams, but the real story will be how well Toronto can limit the Bucks’ offense. If they can contain what’s been the most efficient offense, they’ll be in a good position.

It’ll be a reunion for Antetokounmpo, Siakam, Middleton, and Lowry who were all on the same team during the All-Star break. While they all had to walk away from that game a victor, two of those players will get to walk away a winner in this one.

Milwaukee Needs to Come Out Strong

If Milwaukee wants to keep their sweep of the Raptors alive, it’s quite simple what they have to do — exactly what they’ve been doing all year long. With a 46-8 record, the Bucks are the best team in the league and there’s plenty of stats to support that.

Not only do they rank No. 1 in the league in points per game (119.6 points) and rebounds per game (52.0 rebounds), but they also rank in the top-ten in assists per game (26.1) and points allowed per game (107.5 points). They’ve got the epitome of a balanced gameplan and there’s a reason they’re in the position they’re in.

Led by Giannis Antetokounmpo with 30 points per game, 13.5 rebounds, and 5.8 assists, I’m sure he’ll be a little salty after that loss to LeBron in the All-Star game. Don’t forget Kris Middleton was involved in that loss as well. Middleton is Giannis’ right-hand man and they will be hungry for a win.

Can the Raptors Continue Their Surge?

The Toronto Raptors have been one of the biggest surprises this year — if not the biggest surprise. After losing Kawhi Leonard to the Clippers, no one was giving them a chance at the beginning of the year. Now entering the second wave of the season, they’re the No. 2 team in the East with a 40-15 record.

They’ve managed to do so thanks to their No. 4 ranked defense, allowing just 106.6 points per game — that’s a better mark than the Bucks. While they don’t score as much as Milwaukee, they still rank in the top-15 in points and rebounds per game. They also rank No. 9 in assists per game.

With the Raptors, you never know who’s going to have a good showing because it could be anyone. Pascal Siakam and Kyle Lowry have led the way most of the season, but they get help from Fred VanVleet, Serge Ibaka, Normal Powell, and many others (although Powell won’t be available for this one.