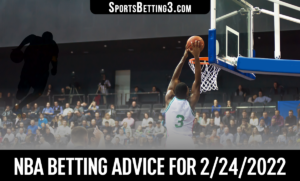 After a solid All-Star Weekend, the NBA is back with seven games on Thursday night. Slates like these can be tricky because a week without action may result in teams coming out rusty, but we at sportsbetting3 help you make the right calls to earn some extra cash! All spreads indicated in parenthesis are courtesy of  BetRivers.

For the narrative folks out there, Darius Garland appeared in his first All-Star game in his home stadium. A hot start to the second half of the season with a game against the Pistons is probable.

Statistically Cleveland averaged almost 107 points per game (PPG) and allowed 102, but Detroit scored around 103 PPG while giving up almost 113. In terms of defense efficiency, Cleveland was one of the best while Detroit was one of the worst in the first half of the season.

Simply, one of the best teams versus one of the worst, a blowout is likely and the point spread is likely to blow over.

For these reasons the under on points and against the spread are more appealing.

No Kyrie Irving for the Nets this game either, and without him the Nets have no one real scoring threat. Seth Curry and Andre Drummond have been solid additions for Brooklyn, but do not compare to the offensive ability of Irving when he is on the floor.

The double whammy of Jayson Tatum and Jaylen Brown are poised for big games against the undermanned Brooklyn Nets. With no real defense in the paint, Tatum should feast on the boards and around the basket. Brown fills up the stat sheet, and this game should be no exception.

This should be a game Boston dominates in, so it feels better to bet against the spread.

Despite the below .500 record, Atlanta plays more solid than their record indicates.

In the past two meetings, Chicago won decisively by 12 and 14 points, respectively. Atlanta will play for a close game and avoid a third blowout as best as they can. The Bulls finished the first half of the season on a five-game winning streak.

Atlanta struggled with opposing big men, and before the break Nikola Vucevic posted eight double doubles in his previous 10 contests. This is a factor that will determine if the Hawks keep this game close or if the Bulls roll for a third time.

Betters pegged this game at a modest spread of anywhere between four to six points, and the gut call seems to think this is a reasonable assumption for the game. Bet the spread because this feels like it will be competitive.

In the meetings between these teams, Memphis holds the 2-1 advantage. Important to note that the one game Minnesota won was 138-95, but the two games Memphis won were by eight points or less.

While the records are marginally different this games feels appealing for points and an exciting game from a real-life perspective. This game likely will be close, and it is both teams hot play recently that makes it feel a lot more competitive than at first glance.

This game fluctuates between both teams and spreads of one to four points, so this game is whatever feels more comfortable to the better as this should be close and either teams’ game.

With Chris Paul sidelined for six to eight weeks, the Suns may rely more on their all-star guard, Devin Booker.

This added responsibility should only push Booker to thrive more, and his best games may be during this stretch where he is leaned on more offensively and as a floor general.

No game would be a better litmus test for that theory than the lowly Thunder. Despite missing their savvy veteran, Phoenix still should trounce Oklahoma City no sweat.

Phoenix is one of the best defensive teams and both teams play at a high pace, this should be a game Phoenix controls from start to finish.

On this slate, this game will be the most lopsided. Do not expect OKC to cover the spread because the Suns may have this game wrapped up by halftime.

The aforementioned narrative arc will be applied here, Stephen Curry balled in the All-Star Game and could easily come out Thursday and give an encore performance at Portland’s expense.

In terms of defensive efficiency, Golden State is the best and Portland is one of the worst. Both teams play at a similar pace.

There is no real way to see how Portland keeps this close unless Golden State comes out and falls on their face or one of the Trailblazers players goes off in the game. These are possibilities, but not the likely outcome.

The spread feels generous for Portland and it would not be shocking to see Trailblazers to miss the mark on the spread.

This game hinges mostly on Nikola Jokic and how dominant he can be against a Kings team that struggles with interior defense.

While the addition of Sabonis helps the Kings, it does not make them a contending team, and they will get blown out if Jokic goes off.

The defense efficiency rating of the Denver Nuggets is middle of the pack, currently ranked 17th, but Sacramento is a horrible 29th. What the Kings possess is one of the fastest paces of play that is a plus game environment for Denver who is near the bottom in that category.

The spread is a decent, but it is fair to say there is no expectation the Kings cover that.

While the NBA is heading back into the action, the avid sports fan always finds ways to win some extra money no matter what time of year. For that extra edge in betting to get you into the green head over to sportsbetting3.com!