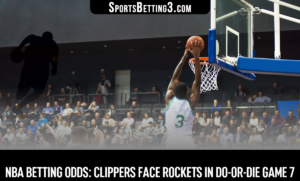 The Houston Rockets will host the Los Angeles Clippers on Sunday in a do-or-die Game 7 contest, with the winner advancing to the Western Conference finals, while the loser’s season comes to an abrupt end.

Odds makers have pegged the visitors as slim favorites (-2) and have set the total right at 220 points. The money line is priced at -135 on Los Angeles, with a take back of +115 on Houston.

It is worth noting that the first six games of this series have all gone OVER the posted total, with another high scoring affair expected in Game 7.

One would think the Rockets have the momentum after coming back from a 19-point deficit in Game 6 to force this winner-take-all contest on their home court, but the Clippers do not seem content with rolling over and letting Houston win this series.

In fact, the Clippers once again find themselves in a Game 7 battle, just like in their opening round matchup against the defending champion San Antonio Spurs, whom they eliminated from postseason play with an impressive outing to close out the series.

The Clippers have the numbers on their side to suggest another Game 7 victory, as they are 10-4 ATS in their last 14 meetings versus the Rockets, including 5-2 when meeting at the Toyota Center. The Clippers are also a very impressive 16-5-1 ATS in their last 22 games played on the highway.

This has been one of the better playoff series thus far, which is saying a lot given the tremendous amount of close games and buzzer-beaters we have had witnessed through the first two rounds of the NBA postseason this year.

The winner moves on to face the Golden State Warriors who are the front-runners to win the NBA title, priced at 5/6 on the odds boards. The loser, well, they will have a lot of questions to address in what will turn out to be a long and painful offseason.