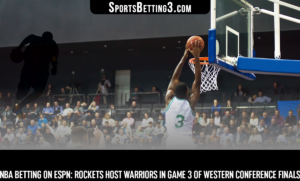 The Houston Rockets are in serious trouble after losing the first two games of the Western Conference Finals to the Golden State Warriors. Now, with Game 3 being played on Saturday night at the Toyota Center in Houston, the Rockets are hoping home court will give them some much-needed momentum to pick up a win and make this a more competitive series.

Oddsmakers don’t see it that way, as the Warriors have been pegged as a -1 point favorite in this Game 3 contest, with the total coming in at 214 points. Tip off is scheduled for 9:00PM ET, airing live on ESPN.

Taking a look at the total, surprisingly, the UNDER is on the Warriors side as they have stayed below the number in eight of their last nine overall and 8 of 11 on the road. The Rockets, however, are OVER in 14 of their last 20 games.

In head to head play, the Warriors are just 4-9 ATS in its last 13 matchups against the Rockets in Houston. The total has stayed UNDER in 8 of last 11 when these two adversaries clash at the Toyota Center.

SPORTSBETTING3.com Notes: The Rockets have not lost three games in a row all season.