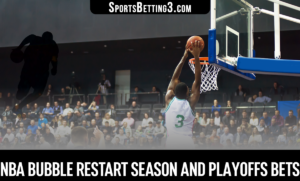 The NBA Bubble has been in place since July 7th with constant Covid-19 testing and extremely strict regulations. The results have been extremely positive with no Covid-19 positives since July 13th. This is a huge development for the league showing this is a proven process that gives players the safety to play the game they love. Thankfully, the season starts on July 30th and we are able to prepare for the excitement of playoff basketball and all the storylines that go along with it.

If you are looking for game-by-game odds you may find sanctuary on this page too! For longer-term bets on the eight-game regular season and beyond see below… May the odds be ever in our favor…

Sounds ridiculous to think that the Nets will not win more than 2 games out of 8 right? Well, let’s look at what they are bringing to the table. Kyrie Irving and Kevin Durant have both opted out of the NBA bubble so we will not see them. Furthermore, Deandre Jordan, Spencer Dinwiddie, Wilson Chandler, and Nic Claxton would all have played a big role for them in the bubble. They will not travel with the team forcing them to sign new players to their roster to try to compete. After the signings of Jamal Crawford and Michael Beasley, the Nets will only have Caris Levert, Jarret Allen, and Joe Harris to lean on, yikes!

Looking at the schedule, the Nets are scheduled to face, the Magic, Wizards, Bucks, Celtics, Kings, Clippers, Magic, and Trailblazers. Assuming playoff teams like the Bucks, Celtics, Clippers, and Trailblazers make easy work of the Nets, that leaves 4 games to be won. It is a tall task to task the Nets to win 3/4 games against teams that are more talented than they are. Hammer the Nets under 2.5.

This one is pretty clear, Zion Williamson is one of the best players in the league already. They want to grab playoff experience as quickly as possible and their whole team made the trip to Orlando. No one has opted out in New Orleans, their roster is hungry to win and make the playoffs. Their schedule right now is, Jazz, Clippers, Grizzlies, Kings, Wizards, Spurs, Kings, and Magic. They could easily win their last 5 games and they can compete with the first 3 teams as well. The Pelicans are motivated enough to go 6-2 at least, maybe even 7-1.

Battle of the Conferences

Jayson Tatum has developed into the superstar that Celtics fans have dreamed of two years ago. He is an absolute scoring machine and is the focal point of their offense. They also have Kemba Walker, Jaylon Brown, and Gordon Hayward. The latter being the x-factor for their team, the Celtics have the deepest roster in the East and can throw 3 defenders at Giannis Antetokounmpo whereas other teams cannot. +650 is extremely generous given the depth and coaching. Lastly, the Bucks do not have a clear second star to pair with Giannis who have not yet won the Eastern Conference. Sprinkling a bit on the Celtics is a great option in the East.

Clippers to win the Title +325

The strongest roster in the league, the Clippers appear prepared to make a serious run at the title. Their biggest competition is the Lakers who have LeBron James and Anthony Davis, with little else. Conversely, the Clippers feature two 6th Man of the Year Candidates, reigning NBA Champion Kawhi Leonard and Superstar Paul George. Rest has always been a key for the Clippers and they now have 3 months off to prepare for the playoffs. Expect the Clippers and Lakers to battle but +325 are fantastic odds to be crowned the NBA Bubble Champion.