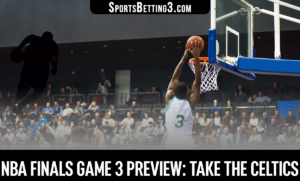 The NBA Finals have shifted back to Boston, and the spread has continued to favor the home team. The Celtics are favored by 3.5 points (-110), and their moneyline stands at -157. There is good reason to side with the green, as the Celtics have had a see-saw postseason, and a healthy Boston squad has not lost consecutive games in a very long time. Let us get into why the Celtics will cover their first home NBA Finals game since June 15, 2010.

Over the last 15 years, the two Finals competitors have won the most postseason games. Since the 15-year span includes the 2008 championship for Boston, it is understandable that the Celtics are one of the top two teams. However, you should be surprised that it is the Celtics with the most postseason wins while the Warriors are second overall over the last decade and a half.

Take the C’s Even Though They Have Struggled at Home

The Celtics were underdogs in both Games 1 and 2, and they continued to show why they have been such an impressive team in 2022. In the first game of the Finals, they surprised the NBA world with one of the best Finals quarters in history and defeated Stephen Curry and the Warriors by double digits at Chase Center.

Ime Udoka has made the squad into a very strong team in just one season. It is just his first year coaching the Celtics, and he has ushered in a revenge tour for Boston with series victories over Brooklyn, Milwaukee, and Miami. Now, Golden State is a new type of opponent.

Unfortunately, the same offensive pitfalls hurt the Celtics in Game 2: turnovers. When Jayson Tatum, Jaylen Brown, and company have committed more than 15 turnovers — they committed 18 in Sunday’s Game 2 — they have an 0-5 record this postseason. On the other hand, when they have 15 or fewer giveaways, Boston is 13-2 in the 2022 playoffs. Keep the turnovers down, and the C’s should be victorious.

In addition, Tatum needs to be finding the open man. When he has at least five assists in the 2022 postseason, the Celtics are 12-2. If he does not reach the number, the Celtics just 1-5. Tatum had just three assists in Game 2, and that mark matched his lowest number from this postseason.

Also, if the Tatum and Celtics are not forcing unnecessary passes, open shots will be there. Golden State will not be able to prevent the Celtics’ open shots, as evidenced by Game 1. Open shots will lead to a Boston win. For example, the Celtics are 9-0 this postseason when Grant Williams makes at least three buckets.

Overall, it will be important to avoid making mistakes, and that is what happened in Game 2. If the Celtics avoid those problems, then they should be all set to provide an impressive showing in front of their home crowd at TD Garden in Game 3.