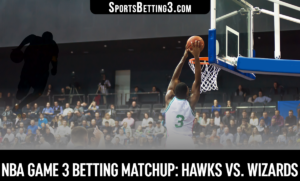 After a split of the first two games in Atlanta and the series tied 1-1, the Washington Wizards will host the Hawks in Game 3 of their best of seven postseason series on Saturday night at the Verizon Center.

Oddsmakers have pegged the road team Hawks as a -4 1/2 point chalk, with the total hovering right around 180 at most sports books.

The Wizards stole Game 1 and home court advantage before the Hawks bounced back in Game 2 to even things up, but many storylines have developed since.

Wizards all-star guard John Wall suffered an injury, with five non-displaced fractures in his left wrist and hand. He was kept out of the lineup in Game 2, and could possibly miss the rest of this series and remainder of the postseason if Washington advances.

“If the pain goes away and I can dribble and do those things again, then it’s all up to me,” Wall told the Washington Post. “Given how competitive I am, if I am able to do those things and dribble and do what I want to do and be myself, then there’s a great [chance] that I will play. But if I can’t be myself, [there’s] no point in going out there.”

The Wizards clearly need Wall in the lineup for any chance of winning this series as was reflective in Game 2 when Atlanta put forth a good team effort and came away with a 106-90 victory.

Before missing Game 2 on Tuesday, Wall notched four straight double-doubles, something that the Wizards will be hard-pressed to find elsewhere.

Ramon Sessions stepped up with 21 points for the Wizards, but down the stretch, the Hawks outscored the Wizards 9-4 in the final minutes of the 3rd quarter to take an 80-75 lead into the final period before eventually evening the series.

With or without Wall, the Wizards are counting on home court advantage, a place where they have won four of the last five meetings.

Additional betting trends include the Wizards going OVER the posted total in 10 of their last 12 games played at home and OVER in four of their last five following a game where they failed to cover the spread.