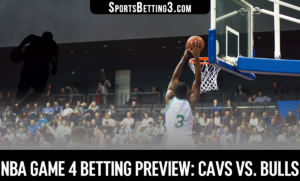 The Chicago Bulls hold a 2-1 series advantage over the Cleveland Cavaliers after a last second buzzer beater by Derrick Rose gave his team a 99-96 advantage in Game 3 as time expired on Friday night.

Game 4 is set for Sunday with tip off scheduled at 3:30 pm est from the United Center in Chicago.

In a little bit of a surprising move, Oddsmakers have priced the road team Cavaliers as a -3 point chalk and have set the total for the game at 195 points.

During the regular season, the Cavs notched a 22-19 SU record on the highway compared to the Bulls, who were 27-14 SU on their home court.

Obviously, playing on the road and trailing in the series, Cleveland is in a bit of trouble, but the betting line suggests they will bounce back and even the series. However, I am not so sure about this.

The Cavaliers have been stellar after an ATS loss, winning their last four against the spread, but they are just 1-5 ATS in their last 6 Conference Semifinals games.

Taking a look at the total suggests going OVER the posted number as Chicago has done so in five of its last seven Conference Semifinals games. Additionally, the OVER is 5-2 in the last 7 head-to-head meetings when these adversaries play in Chicago.

NBA futures odds have the Bulls priced at 5/1 to win the championship this season and the Cavaliers at 11/2.

Special game props for this contest include, Derrick Rose scoring 30.5 points, with +550 paying out on the OVER and -900 on the UNDER.

Similar odds are offered for LeBron James’ expected point total, which is set at 39.5. Backing the OVER comes with a generous +650 reward, but going UNDER is a different story with a price of -1200.