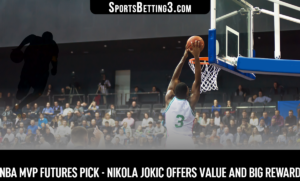 That, folks, is not where the value is.

What you want to take a look at as the NBA heads into its mid-February lull, punctuated by the All-Star break, is what is going on in the Most Valuable Player futures market.

Especially this year, because the books are not paying enough attention to a certain guy: Nikola Jokic of the Denver Nuggets.

If someone had told you in July that Denver would be near the top of the Western Conference standings at this point of the season, you would have thought they were crazy. There is nothing sexy about this team, but they are deep, well-coached and are playing above expectations moreso than any team not named the Milwaukee Bucks.

Going into Friday’s matchup with the Philadelphia 76ers, Denver was 37-17 – just a game and a half behind the Golden State Warriors despite missing several key players for long stretches of the season.

Much of that success can be attributed to Jokic, the 7-foot-2 point center from Serbia who is second in the NBA in triple-doubles behind Russell Westbrook, who has 21. Jokic has 10, including four in his past seven games (not including Friday night vs. Philly).

What the books do not realize is that for all of Harden’s scoring prowess, his team is underachieving … and thus he is not “valuable” when it comes down to winning.

Jokic is currently sitting at 40-1 after being 100-1 in the preseason and seeing his odds slowly reduced over the course of the season. There is no reason for Anthony Davis to be listed at 20-1, especially after all of the hysteria he just put the New Orleans Pelicans and the rest of the NBA through.

Sooner or later, the books will get wise to him. Sharp bettors should get him at 40-1 before those odds drop.