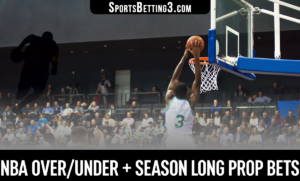 Even in this strange year, we will be able to place NBA season-long bets. The 2020 NBA season gets underway this week with a 72 game season rather than the normal 82 games. This will be important to take into account as the season goes forward and we look to place bets.

For the under/over picks, we will be breaking down the schedule as it relates to a normal schedule. For instance, the Lakers’ projected wins are set at 48.5. In a normal season, this would equate to about 55 or 56 wins. I have added this so we can keep everything in perspective.

Kevin Durant is back like he never left. To think the Brooklyn Nets roster is not excited for the regular season is foolhardy. Caris Levert is one of the strongest 3rd guys in the NBA. Kyrie Irving looks rejuvenated and ready to once again compete for a title.

The return of Kevin Durant, who looks like he is in his prime still, is huge. His minute totals are the only thing that gives me hesitation on their amount of wins. However, Brooklyn has one of the strongest benches in the NBA.

Joe Harris is a top 3-point shooter in the NBA and Spencer Dinwiddie is still in Brooklyn. They have maintained all of their picks too so they could make a midseason trade to strengthen them even further.

Donovan “Spider” Mitchell is the leader of a strong Utah Jazz roster that plays rock-solid defense. Utah is expected to have a healthy Michael Conley this season as well as Bojan Bogdanovich. These are huge additions as Bojan was often injured last year along with Conley.

Having a legitimate point guard that can defend is huge for Utah. It frees up Donovan Mitchell to use his energy primarily on offense where they can struggle to score in spurts. Bogdanovich will surely help offensively as well, he averaged 20 points per game last season.

Utah should be able to take advantage of teams early on. Their aggressiveness will surely give teams offensive fits. Their projection of 47 wins in a normal year is rather generous. This team should easily surpass this total and make a playoff run.

This is a longshot but of course but the value is excellent. Devin Booker is getting his first true point guard who will constantly feed him the ball. He frees Booker up on defense to conserve energy that is better served on offense. He will also have the green light in every game.

We know he has the talent, he has scored 70 points in a game before. This is worth a stab.

Did everyone see that block that he had against Jayson Tatum in the bubble? Highlight real plays like that do not win you awards, but they sure do help.

NBA Math has calculated that Bam Adebayo is worth 49.2 in defensive points saved (DPS). This is good for second in the NBA behind only Giannis Antetokounmpo. Bam averaged 1.1 steals and 1.3 blocks per game in 33 minutes. The value here is rock solid for Bam.