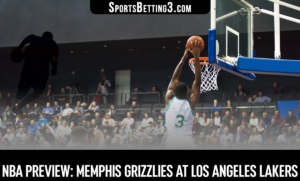 It’s a Friday night match-up we’ve been waiting for. Ja Morant and the Memphis Grizzlies will head to Staples Center to face off against Lebron James and the Lakers on Friday night. Both teams were red-hot heading into the All-Star break, now Ja Morant and the Memphis Grizzlies will look to upset the Lakers at home. With both squads getting some well deserved rest over the break and no injuries of note, this should be the most entertaining game of the night. Let’s evaluate what both teams bring to Friday nights game.

Grizzlies looking for a strong push after the break

The Grizzlies come into Friday nights game as the eighth-seed in the Western Conference. Before the break they won two-straight games and will look to make it three in a row against the Lakers. This is a basketball team that you can’t count out when thinking about an upset. If you need convincing, take their game against the Dallas Mavericks. Memphis came in as 4-point underdogs and finished the game winning 121-107. Rookie of the Year candidate Ja Morant has proved to be exactly what the Grizzlies needed this year. Currently leading the team in scoring and assists. Beating the Lakers at home will be tough though. The last time these two faced was in late November and Los Angeles was barely able to escape Memphis with a win (109-108). In that previous match, Memphis shot better from the field, was more efficient from the three-point line and out-rebounded Los Angeles. Although it seems unlikely, Memphis being able to pull off an upset isn’t unrealistic.

The Lakers are already the No.1 seed in the Western Conference and are four games ahead of the Denver Nuggets. What the Lakers need now is to keep that lead heading into the playoffs. Lebron James seems to be enjoying himself in Los Angeles, with a team that talented, I understand. The Lakers will have their work cut out for them against the Grizzlies though. The good news is the Lakers have a solid 18-7 home record. They’ll need better shooting this time around though if they’re looking to hold off the Grizzlies. Coming off a huge win on the road against the Nuggets bodes well for the Lakers morale and they’ll need it when facing Memphis. The Lakers prowess on offense shadows how great they are on defense. Be on the lookout for the Lakers to try and key in on Morant in order to shut down the Grizzlies offense.

Regardless of who comes out on top, you won’t want to miss this game.