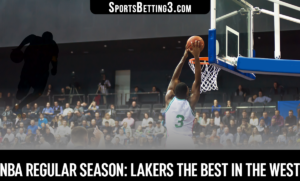 This is Lebron James’ favorite time of the year. The NBA 2019-2020 regular season is winding down and the Lakers are leading the Western Conference. James, now in his 17th season, is also favored to win regular season MVP honors.

The NBA suspended the regular season on March 10, 2020, when Utah Jazz player Rudy Gobert tested positive for COVID-19. Up to that day, Lebron’s Lakers had only lost 14 of 63 games.

What Makes the Lakers So Special?

The Lakers’ strength is a byproduct of Lebron James and Anthony Davis. This Dynamic Duo helped guide the team to its impressive record. They’re not the only standout pair in the league. Westbrook-Harden, Leonard-George and Doncic-Portzingis also come to mind, to name a few.

To the casual observer, the Lakers lofty position is the result of injuries to the West’s perennial Champion, the Golden State Warriors. On closer observation, analytics tell us how the Lakers climbed atop the NBA Western Conference.

In the table below, we tested the strength of three team variables: field goal %, 3-Pt shot %, and free throw %. In this scenario, final game score is the dependent variable.

Pearson’s R-statistic measures how strongly an independent variable influences the value of a dependent variable. The R-stat tests the correlation between the variables. It assigns a number between zero and one (0-1.) that represents the degree of influence.

Note that Pearson’s R coefficients is .62. This statistic measures relatedness to final score. The R-stat informs us that the team field goal percentage is strongly related to the Lakers final score.

Moreover, the scatter plot displays key facts about the Lakers winning environment. Notably, the Lakers current trend is moving in the direction of greater offensive production. The team scored 112 points or more in each of the last eight victories. In addition, we observe the higher scores (blue circles) congregate where field goal percentages (x-axis values) are above 40.

This data provides valuable insights for Lakers bettors. The following can be used to handicap future matchups to your advantage.

The Lakers win when: