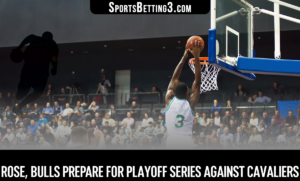 Familiar foes meet in the Eastern Conference semis as the Chicago Bulls prepare for a crucial seven-game series against the Cleveland Cavaliers, with Game 1 scheduled to be played on Monday, May 4 at the Quicken Loans arena in Cleveland. Tip off if slated for 7:00 PM ET.

The Bulls needed six games to get past the Bucks in the opening round, but they sent a message to the entire league in the process by demolishing Milwaukee 120-66 in what turned out to be the final contest of the series before advancing to the semis to meet up with the Cavaliers.

In case you’re wondering, their 54-point lopsided margin of victory was the largest in an NBA playoff series for a clinching game. This came after they jumped out to a 3-0 series lead before the Bucks bounced back with two consecutive wins of their own.

As for the Cavaliers, they made quick work of their first-round adversary by sweeping the Boston Celtics in four games. However, it came at a cost as they lost big man Kevin Love, who will be out the remainder of the postseason and is expected to miss the next 4-6 months.

Now that Chicago has moved on to face Cleveland (without Love), Derek Rose believes that his side has all the pieces in place to beat LeBron James and his Cavs in what should be a battle-tested series for both teams.

“We were in a battle, we just lost to them in a series a couple of times so we get a chance to redeem ourselves and really go out there and compete again” said Rose.

Chicago (7/1) and Cleveland (7/2) are two of the top three teams favored to win the NBA championship this season. The other is Golden State (7/5).

SportsBetting3.com NOTES: The Cavaliers are 22-1 SU at home since acquiring Timofey Mozgov, J.R. Smith and Iman Shumpert mid-season. The Bulls finished the regular season with a road record of 23-18 SU.