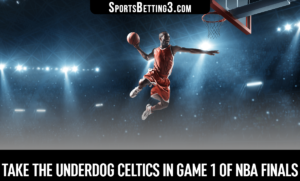 On June 2, the 2022 NBA Finals commence. It will be the Boston Celtics (+3.5) at the Golden State Warriors. Ime Udoka’s Celtics travel to Chase Center after entering the season at +4000 to win the title. They surpassed their over/under of 45.5 wins by winning 51 games, but they do not have homecourt in the Finals, as the No. 3 seeded Warriors won 53 contests during the regular season.

Klay Thompson returned midseason and looked strong. He then helped seal the Western Conference Finals in favor of the Warriors. Golden State seemingly strolled through its conference finals series while Boston had to battle it out in seven games with both Marcus Smart and Robert Williams III ailing throughout. The Celtics were able to get by the Miami Heat — the 2020 Eastern Conference champions — even after the 11-0 barrage from the home team in Game 7. Smart hit a couple of free throws to end Miami’s hopes of returning to the Finals after one year away.

Are the Celtics and Warriors Healthy?

As the Celtics await to hear the Game 1 health status of Williams (questionable, knee), Smart has deemed himself ready for the beginning of the Finals. Meanwhile, the following Warriors are questionable for Game 1: Andre Iguodala, Gary Payton II, and Otto Porter Jr. Golden State was able to get a lot of rest in before the Finals, as Golden State has not played since its 10-point victory in Game 5 on May 26.

The Warriors have been able to stay at home recently. Game 1 of the Finals is exactly one week from the team’s last contest. Curry was the only Warrior to put up triple-digit points in the previous series, but can a healthy Smart — well, he should be mostly healthy — contain Curry? This Celtics defense has been dominant for a long time now. It will determine if Boston has a good chance in the Finals.

Take the Celtics in Game 1

Homegrown talent is on both sides of the Finals, and it is the first time since the 1998 NBA Finals that the top three playoff scorers on both sides were drafted by the two conference championship teams. In addition, Robert Williams and Draymond Green were drafted by the Celtics and Warriors, respectively. It was only a few years ago that these teams had the likes of Kyrie Irving and Kevin Durant, who are quite possibly the opposite of homegrown talent as we have seen what their careers have become.

The 2022 NBA Finals is a great thing to see with Tatum, Brown, and Smart taking on Curry, Thompson, and Poole (by the way, those are the top three scores on both sides if you did not click on the link above). Can the Celtics put up a fight and at least keep it close in Game 1. It seems like the answer is yes, so back the green team +3.5 in Game 1.