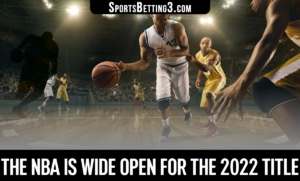 Could it be the year of the Phoenix Suns (+425) after they could not get the job done in the 2021 NBA Finals? While the Suns are waiting for Chris Paul and Devin Booker to return, the Golden State Warriors (+450) are in hot pursuit while they hope for Draymond Green to return soon. Meanwhile in the other conference, can the co-Eastern Conference favorite Milwaukee Bucks (+650) repeat as champs?

According to Vegas, the Bucks and Brooklyn Nets (+650) are beasts of the East. However, the Philadelphia 76ers (+700) are very close behind. They became the seventh team to 40 wins this season, as James Harden returned from a one-game absence. It was an impressive win over the Chicago Bulls, who were in first place in the East fewer than two weeks ago:

Joel Embiid dropped 43 points for the @sixers at home to lift them to their 40th win of the season!

Joel Embiid (+800) is fighting for the Most Valuable Player award with Nikola Jokic, who is keeping the 39-26 Denver Nuggets (+3000) out of the play-in. This Nuggets team, who is getting back Michael Porter Jr. and Jamaal Murray, could be the biggest dark horse in the 2022 NBA playoffs. So, let us start there with the value picks for the remainder of the season.

Who Are the Value Plays Heading into the 2022 Postseason?

Those pesky Nuggets, and 27-year-old Jokic — who should be the MVP again (+1600) — are making a ton of noise in the West, which has one superpower team in the Phoenix Suns. The fact that the Nuggets could finally be healthy for a playoff run with Jokic at the top of his game puts them in the position to shock the world. A single injury — or two — in the Western Conference could catapult the Nuggets into the Finals.

In the East, the Boston Celtics (+2000) are another strong value play. Boston has the league’s best defense (105.6 defensive rating), and the Celtics’ offense has rebounded behind unbelievable performances by Jayson Tatum. Speaking of offenses, the Utah Jazz (+1800) has the strongest offense (115.8 offensive rating) and could be a value play as well. There will be some noise made by the Nuggets, Celtics, or Jazz in the playoffs, but it is not very likely that we will see any of them in the Finals. They all have a chance, but your best chance is with the best player in the bunch in Jokic.

Which Team Should You Actually Back on Way to the NBA Finals?

The 2021-22 Suns cannot be stopped, as they are top three in both offensive and defensive rating:

There was a mention of some 40-win teams earlier in the article, but how does 52 wins sound? The Suns are 52-13 after their 102-99 victory over the Orlando Magic. The league-best Suns are eight games above the second-best team in the NBA. That team is the Memphis Grizzlies (+2500), who are fifth in offensive rating and eighth in defensive rating. The craziness of the current season has seemingly not affected the Suns. Phoenix is far and away better than the much-publicized Ja Morant show in Memphis. The Suns should be the overwhelming favorites to be in the NBA Finals and finally win their first championship in franchise history.