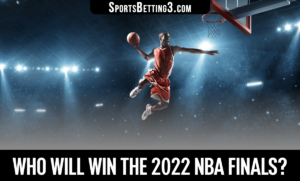 The NBA Finals are set to begin on June 2, 2022, and it will be the fifth consecutive year in which a new champion will be crowned. Each of the remaining teams has won at least one championship since 2008: the Celtics won that year with their edition of the big three; Dirk Nowitzki and the Mavericks took down the “Heatles” in 2011; Miami took the title in both 2012 and 2013; and Golden State has championships from 2015, 2017, and 2018.

So, who will win the NBA Finals? The easy answer is the Golden State Warriors, who are -152 to win the 2022 NBA title.

Warriors Projected to Win Their Fourth Title in Eight Years

It is the Warriors and everyone else at this point in the playoffs. For the most part, Golden State has dominated its competition this postseason, as Jordan Poole has joined the “Splash Brothers” — Stephen Curry (25.5 points per game) and Klay Thompson (20.4) — as the perfect third musketeer on offense. Andrew Wiggins — who surprisingly started for the 2022 Western Conference All-Star team — helped with his 17.2 points per game during the regular season.

With Draymond Green as the glue guy and defensive general, the Warriors are the favorite to take the championship. They will have a tough test on their hands with either the No. 1 seed Miami Heat (+400 title odds) or the No. 2 seed Boston Celtics (+250) from the Eastern Conference. Will it be Jayson Tatum or Jimmy Butler as the star player trying to take down the Warriors?

The Celtics tied the series with a Game 4 drubbing of the Heat in Boston on Monday night, and the series shifts back to Miami for what has become a ‘three-game series.’ Tatum stepped up to bring the series to 2-2, as Boston’s defense stepped up without Marcus Smart in the lineup. Both teams are hobbled, so some rest for Golden State could be helpful while Boston and Miami battle it out.

Both the Celtics and Heat have tremendous defenses, as Boston finished with the best defensive rating in the NBA during the regular season. For those wondering, the Warriors were second and Heat finished fourth. Can Miami slow down Tatum like it did in Game 3? If so, the Heat could return to the Finals. Miami was last in the Finals in 2020. If not, it will be Boston’s first Finals appearance since 2010. The Celtics are favored heading into Game 5, so it could be a heavyweight battle between Boston and Golden State in the 2022 Finals.