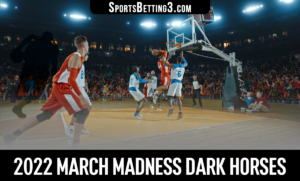 The 2022 NCAA tournament doesn’t have a clear cut potential champion. Unlike during the 2020-21 season where it seemed like Gonzaga and Baylor were on a collision course — and later met in the final — this year could produce a more unlikely champion.

But what should be looked for in a potential under-the-radar champion? Some teams, like when UConn won in 2011, pick up steam during its conference tournaments and never look back. Others can be consistently strong throughout the year but are overlooked due to not having major NBA prospects.

But playing in a single-elimination tournament in March opponents up opportunities for many teams. For how to bet on college hoops, check out our college basketball guide. Here’s a look at some programs that are being undervalued.

UCLA made a surprising run to the Final Four after qualifying for the tournament as an 11 seed who had to play in the First Four. The Bruins, who are +2800 to win the crown, brought back almost all of their key contributors from that team. What has some people down on UCLA now is the injury to star guard Johnny Juzang.

Juzang does a little of everything for the Bruins, averaging 16.7 pounds, 4.7 rebounds and 1.8 assists per game. UCLA finished second in the PAC 12 with a 23-6 record. Other than a stretch of non-conference games where the Bruins struggled on the road, they have been consistent.

Jamie Jaquez Jr. (13.3 points per game),  Jules Bernard (12.3) and Tyger Campbell (11.3) also average in double figures for UCLA. The Bruins should get a strong seed and will be looking to better last year’s performance.

Arkansas suffered a soon in late December and early January that left the Razorbacks 0-3 in SEC play. However, Arkansas then won 13 of its next 14 games to climb into the Top 25 and into the top four of the conference standings. When the Razorbacks are at their best, they are a high-energy team that relies on movement to create opportunities.

Arkansas, which is +4000 to win the crown, has four players who average in double figures scoring. As a team, the Razorbacks are 40th nationally, averaging 77.3 points per game. JD Notae leads Arkansas in points and assists, averaging 18.9 and 3.6 per game, respectively.

One injury to keep an eye on is Pitt transfer Au’Diese Toney, who averages 10.4 points per game. Toney has been a key contributor for Arkansas.

Providence, which won the Big East regular season crown with a 25-4 record and 14-3 mark in conference play, hasn’t gotten a lot of national respect. Sure, the Friars have been ranked in the top 10 for weeks, but few feel Providence has what it takes to make a serious run at the title. Backing the Friars would provide bettors with a healthy +7500 return.

Part of the lack of belief in Providence stems from the Friars being swept in the regular season by Villanova. The Friars also have a penchant for playing in close games. But Providence has been successful for a reason.

Center Nate Watson, who hasn’t made a 3-pointer all season, leads the team in scoring by averaging 13.7 points per game.  Watson is supported by guard Jared Bynum, who averages 12.9 points per game and knocks down 43.8 percent of his 3-point attempts. Backing Providence may provide a lot of cold sweats, but would likely never be boring.

Illinois doesn’t feel like a dark horse, although its +3500 odds put them that category. The Illini have one of the best  post players in the county in Kofi Cockburn, a double-double machine that averages 21.0 points and 10.6 rebounds per game. Outside shooting is also a specialty of Illinois, which knocks down 36.7 percent of its attempts.

The Illini shared the Big Ten regular season crown with Wisconsin. Illinois entered the postseason on a three-game winning streak, including a 74-72 win over Iowa. The Illini have had their share of struggles, losing to a bad Cincinnati team during non-conference play.